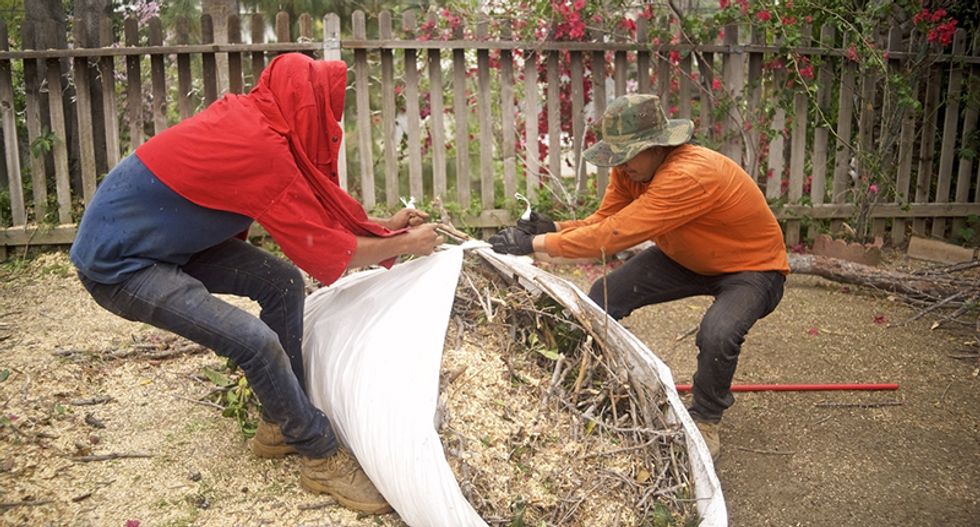 While President Donald Trump is threatening children of immigrants that were brought to the U.S. illegally, Texas is beginning to cleanup after Hurricane Harvey destroyed Houston.

There are more than 200,000 homes that were damaged by Harvey. It includes 13,500 that were completely destroyed. According to a Washington Post report, the need to rebuild quickly might come down to labor provided by undocumented immigrants.

“If they deport all of us, who will rebuild?” Samuel Enríquez said. The 36-year-old was standing in the parking lot of a Home Depot searching for work. “We do more for less.”

Despite the hostilities, he decided Texas was the place to be for work given the need. If Trump intends to continue the record-setting deportations, it might raise the price of rebuilding the Gulf Coast. At the same time, Trump is demanding a fix to the Deferred Action for Childhood Arrivals program (DACA), but only if his border wall is funded. Funding such a massive infrastructure project would pull funding from not only roads and bridges but from Houston too.

This isn't the first time Republicans are being faced with the problem. After Hurricane Katrina, former President George W. Bush was forced to cave into pressure from construction companies using immigrant labor. The Post reported that Bush's action "allowed more than a quarter of all government-paid recovery jobs to go to [undocumented] immigrants."

Leaders in the construction industry are already warning that they won't have enough American-born workers to rebuild Houston. The federal government is expected to begin negotiations for massive contracts for debris removal, roofing repairs and other FEMA-related work.

“If they would relax the rules, honestly, that would be great, we could use it,” said Jeffrey Nielsen, the Houston Contractors Association's VP. Prior to Harvey, the industry was suffering from a worker shortage, now the lists of jobs is growing even larger.

There's no guarantee that Trump would allow companies to relax worker verification guidelines for their federal contractors.

White House homeland security adviser Tom Bossert said that they wouldn't let an undocumented immigrant "starve or die of thirst or exposure," but their loyalty ends there. They have no intention of helping anyone undocumented with their homes or with jobs.

Outside of Washington, D.C., however, workers are desperately needed and it might result in "under the table" and "off the books" deals with subcontractors of subcontractors.

“I didn’t care where they came from,” said Guillermo Herrera, owner of a banquet hall with a wedding scheduled Saturday. “We needed the help.”

Without undocumented labor, “there was no damn way” to get the work done, Herrera explained. After the wedding event, he plans to close again for a few weeks to do more extensive rehab work, which he anticipates will require even more undocumented labor.

One couple arrived from Louisiana to help their daughter clean up her flooded home in Humble, Texas. Dave and Josephine Bushnell had some assistance from local church volunteers, but they needed actual construction professionals who could reassemble walls, fix wiring and put in floors. They'd be more than happy to accept day laborers, regardless of immigration status.

“Oh yeah. They need the help too. The government helps us, we help them, and all of us help the economy,” Dave Bushnell told The Post. “You see how hard they work. They’ve probably lost everything too, but they can’t sit and wait for a handout. They’ve got to work.”

“For the country to rebuild Houston, it will need amnesty for immigrants,” said Nicaraguan immigrant Roberto Benavidez. “I get it. It seems like we are busting in the door of your house and asking to stay, but in reality, we are knocking on the door and offering a service.”

According to Kevin Appleby, the director of policy for the nonprofit Center for Migration Studies of New York, Trump has three options.

The one he expects will occur is that Trump will give a "wink and a nod" to not conduct any ICE raids of construction companies rebuilding Houston.