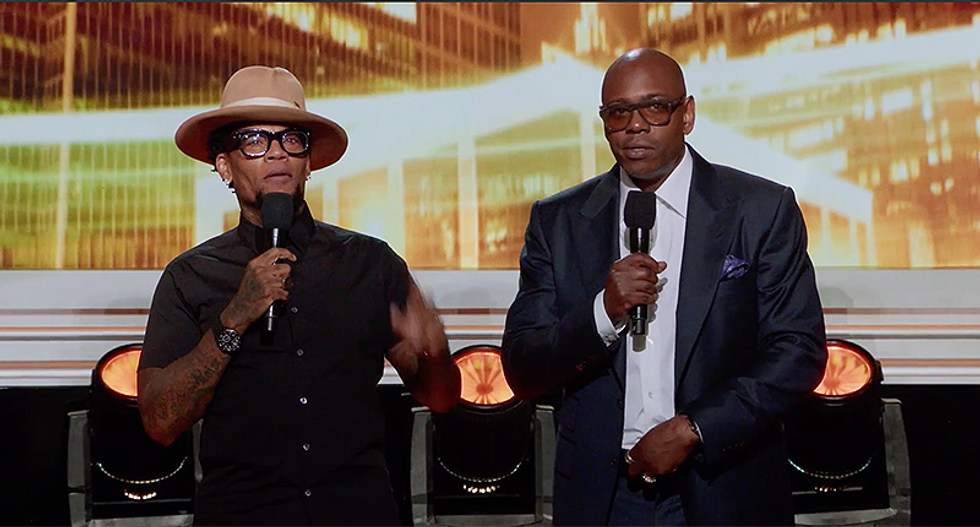 Comedians Dave Chappelle and D.L. Hughley spent part of their introduction of Russell Simmons at "Def Comedy Jam 25" improving an every-day 30-second set up into a much longer stand-up about free speech and the Charlottesville protests.

In a video released by Netflix, the two men promise they're not there to offend anyone but they have no intention of protecting people's feelings either, the Daily Beast quoted.

Hughley went on to say that “rejection” by the majority of voters should never be considered a “reason to stop” pushing boundaries through comedy.

“I wish you had said that before my third season,” Chappelle joked, referring to his final season of "The Chappelle’s Show," where he walked off quitting the series.

“What Def Comedy Jam was always willing to do was take the heat, the criticism and the hate,” Chappelle read from the script on the teleprompter. “Because that’s basically just being black in America.”

He managed to read through that part of the script but cracked up after the music began playing. “That’s just a weird line,” he noted, knocking the comic musical choice by Def Comedy Jam DJ Kid Capri and dancing around.

“If we told them what being black in America is, would they believe us?” Chappelle asked the audience. “F*ck no, they wouldn’t. There’s a f*cking white supremacist starter kit at Target.”

“Let me get some tiki torches, some khaki pants and a f*cked up haircut, I’ve got something going on next week,” said Chappelle.

“It’s real right now,” he went on. “And have we seen it all before? Yep! So I'm going to read that last line again and Kid Capri, maybe a song that is a little less happy."

“You can leave this in, too,” Chappelle encouraged producers from the stage as it was being filmed.

Watch the clip from Netflix below:

Twitter filed a lawsuit against Republican Texas Attorney General Ken Paxton in a California federal court Monday and asked a judge to halt the state's top lawyer from investigating the company.

In CBS' highly anticipated special on Sunday night, Prince Harry and Meghan Markle, the Duke and Duchess of Sussex, spoke to Oprah Winfrey, opening up about their decision to leave the British royal family and the fractured relationships they left in their wake.

It was an explosive interview — enough so that it cost CBS a license fee of between $7 million and $9 million to air, per The Wall Street Journal — in which Harry described how meeting Meghan made him realize that he was trapped within the system of the royal family. This was only exacerbated by concerns over Meghan's mental health, the blatant racism to which she and their son, Archie, were subject, and ruthless tabloid scrutiny.

Michelle Obama to be inducted into U.S. National Women's Hall of Fame