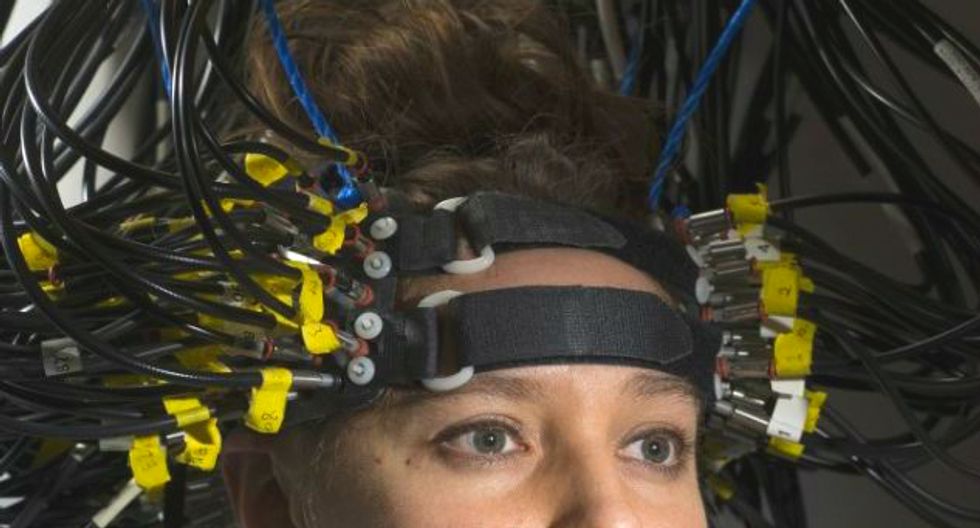 A woman wears a diffuse optical tomography cap similar to what Facebook would use (image via Washington University of St. Louis).

At a conference earlier this year, the head of Facebook's "creepy" and secretive "Building 8" development division announced that the company literally wants to build hardware to read users' minds.

Now, according to Gizmodo, they've released more details on how they plan on doing it.

Using a "brain-to-computer interface," the company wants to send thoughts directly from your brain onto Facebook, Building 8 head Regina Dugan told crowds at the April conference.

At an MIT Media Lab conference earlier this week, Mark Chevillet, a neuroscientist who heads Facebook's mind-reading project, explained the basics of how they intend to do it.

The interface would use "noninvasive sensors to detect brain signals associated with a person thinking a word," and then an artificial intelligence-aided algorithm will figure out what the word was.

"The team is leaning towards using a technology called diffuse optimal tomography to pull all of this off," Gizmodo noted, "which would work by shining near-infrared light onto brain tissue, and deducing patterns of neurons based on how the light scatters."

This interface, Chevillet said, would act as a solution to people shying away from using voice dictation within earshot of other people, eliminating the verbal portion of dictation and going straight to the source.

This type of technology already exists and has been developed for a while, the report notes, often used to "allow people with disabilities to control paralyzed or prosthetic limbs." That technology, however, is simpler than translating brain waves into words.

At a demonstration at the Washington University of St. Louis in 2014, researchers showed off a diffuse optical tomography cap similar to what Facebook may initially use to detect brainwaves for their interface. The large, space-age piece of technology would be a "hard sell" for the average Facebook user, Gizmodo noted.