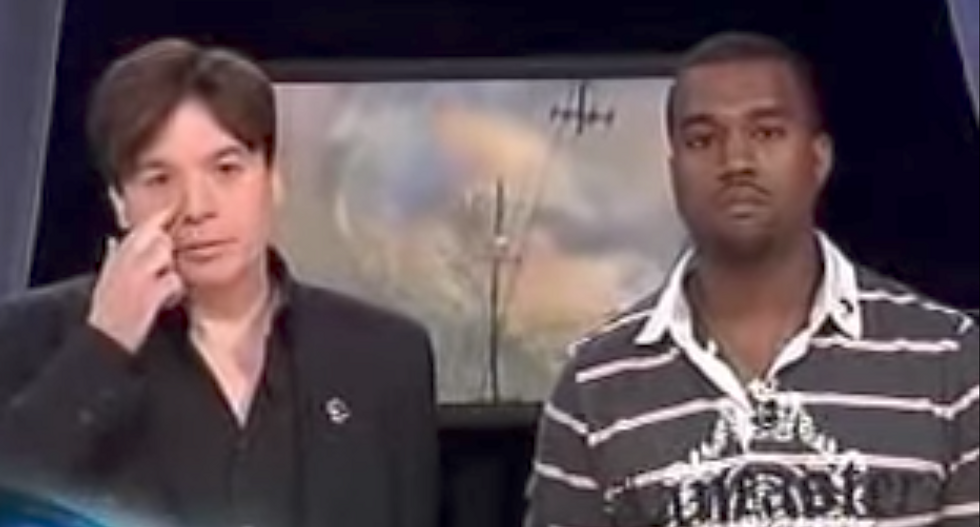 Tuesday, a dozen big-named celebrities will gather to participate in “Hand In Hand: A Benefit For Hurricane Relief.”

The telethon, which aims to raise money for victims of Hurricanes Harvey and Irma, recalls a similar benefits concert which produced one of the most controversial and iconic moments in modern political history.

The year was 2005, the War in Iraq was far from "accomplished," and Hurricane Katrina had ransacked five southeastern states—including Louisiana. NBC’s Matt Lauer was hosting “A Concert for Hurricane Relief,” which include appearances by Lindsay Lohan, Leonardo DiCaprio, Mike Meyers and, of course, Kanye West.

“With the breach of three levees protecting New Orleans, the landscape of the city has changed dramatically, tragically and perhaps irreversibly,” Meyers said during the live telethon, alongside West. “There’s now over 25 feet of water where there was once city streets and thriving neighborhoods.”

That’s when West, who was then just 28, deviated from the prepared script and made benefit concert history.

“I hate the way they portray us in the media,” West said to the live TV audience. “You see a black family, it says, 'They're looting.' You see a white family, it says, 'They're looking for food.' And, you know, it's been five days [waiting for federal help] because most of the people are black. And even for me to complain about it, I would be a hypocrite because I've tried to turn away from the TV because it's too hard to watch.”

“I've even been shopping before even giving a donation, so now I'm calling my business manager right now to see what is the biggest amount I can give, and just to imagine if I was down there, and those are my people down there,” he continued. “So anybody out there that wants to do anything that we can help—with the way America is set up to help the poor, the black people, the less well-off, as slow as possible. I mean, the Red Cross is doing everything they can. We already realize a lot of people that could help are at war right now, fighting another way—and they've given them permission to go down and shoot us!”

Visibly uncomfortable, Meyers attempted to steer the segment back on track. And subtle and but in even many ways more profoundly devastating is the lasting damage to the survivors’ will to rebuild and remain in the area,” Meyers said, awkwardly scratching his nose. “The destruction of the spirit of the people of Southern Louisiana and Mississippi may end up being the most tragic loss of all.”

Watch the iconic clip in all its glory, via YouTube: