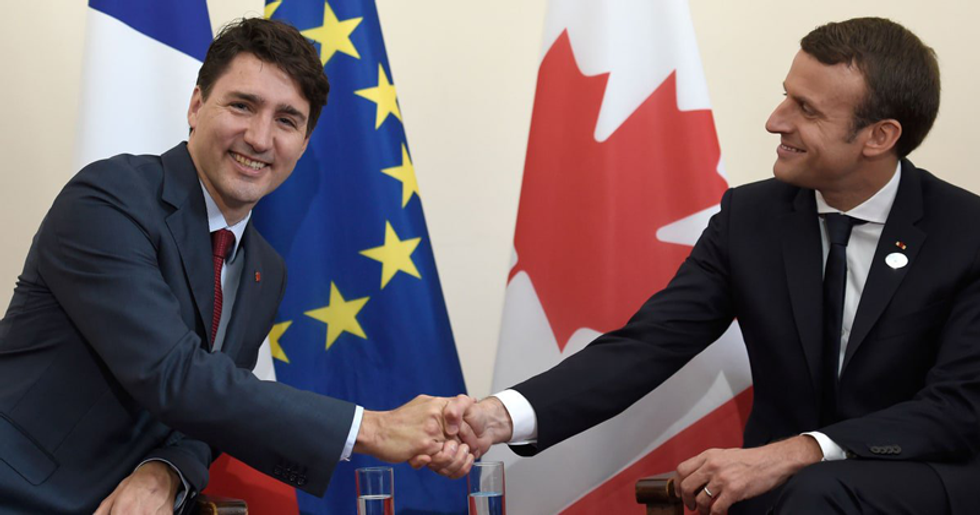 The Donald Trump administration's foreign policy failures are compounding the risk of crises as global alliances are redrawn as American power decreases across the globe, a provocative new essay argues.

Eliot A. Cohen is the director of the Strategic Studies Program at the Johns Hopkins University School of Advanced International Studies and a former senior State Department official and contributing editor at The Atlantic. Writing in the October issue, he says President Trump is "ending the American Era."

Cohen notes, "one defense of Trump is that his deeds are less alarming than his words. But diplomacy is about words, and many of Trump’s words are profoundly toxic."

"Foreign governments have adapted," Cohen explained. "They flatter Trump outrageously. Their emissaries stay at his hotels and offer the Trump Organization abundant concessions (39 trademarks approved by China alone since Trump took office, including one for an escort service). They take him to military parades; they talk tough-guy-to-tough-guy; they show him the kind of deference that only someone without a center can crave."

Foreign leaders "have begun to reshape alliances and reconfigure the networks that make up the global economy, bypassing the United States and diminishing its standing."

"In almost every region of the world, the administration has already left a mark, by blunder, inattention, miscomprehension, or willfulness.," Cohen explains. "On issues that are truly global in scope, Trump has abdicated leadership and the moral high ground."

Cohen sees little hope of Trump pivoting while in office.

"Matters will not improve. Trump will not learn, will not moderate, will not settle into normal patterns of behavior," Cohen explained. "Septuagenarian tycoons do not change fundamental qualities of their personalities: They are who they are."

This, sadly, could result in war -- even with China.

"A man who has presided over failed casinos, a collapsed airline, and a sham university is not someone who knows when to step back from the brink. His domestic political circumstances, already bad, seem likely to deteriorate further, which will only make him more angry, and perhaps more apt to take risks," Cohen noted. "In a fit of temper or in the grip of spectacular misjudgment—possibly influenced by what he’s just seen on TV—he could stumble into or launch an uncontrollable war."

It could potentially take a long time for America's standing to improve -- if it ever does.

"America’s astonishing resilience may rescue it once again, particularly if Trump does not finish his first term. But an equally likely scenario is that Trump will leave key government institutions weakened or corrupted, America’s foreign-policy establishment sharply divided, and America’s position in the world stunted," Cohen concluded.