'He is controlling the world': Racists praise Netanyahu's son for anti-Semitic attack on George Soros 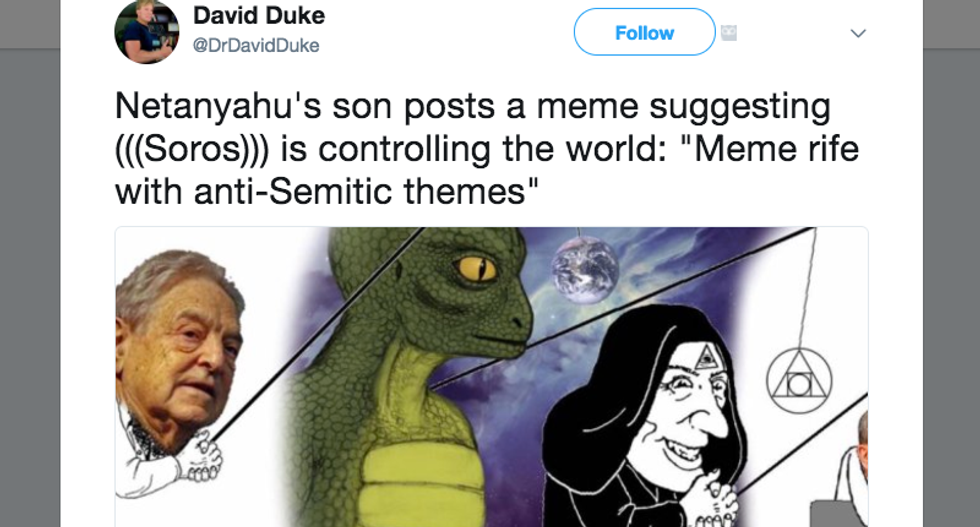 David Duke, former grand wizard of the Ku Klux Klan, praising Yair Netanyahu, the son of the leader of the Jewish state.

The son of Israeli Prime Minister is being praised by racists after posting an anti-Semitic cartoon blaming his family's legal troubles on billionaire investor George Soros.

"Yair Netanyahu, the son of Prime Minister Benjamin Netanyahu, posted an image on his Facebook page Saturday that seems to suggest a conspiracy is behind his family’s growing legal problems," Haaretz revealed. "The meme is laden with anti-Semitic imagery."

"The meme, captioned 'the food chain,' features a photo of George Soros dangling the world in front of a reptilian creature, who dangles an alchemy symbol in front of a caricature of a figure reminiscent of the anti-Semitic 'happy merchant' image," Haaretz explained. "The other figures in the chain are former Prime Minister Ehud Barak, anti-Netanyahu protest leader Eldad Yaniv and Meni Naftali, a former chief caretaker at the Netanyahus’ official residence who implicated Sara Netanyahu in the case she is being indicted in."

"The Daily Stormer, an American white supremacist and neo-Nazi website dedicated its homepage banner on Tuesday to Israeli Prime Minister Benjamin Netanyahu’s son Yair," 972 Mag noted. "The banner shows a photo of a joint-smoking Yair Netanyahu photoshopped on top of the West Bank separation wall, along with a sniper rifle pointed directly at a racist caricature of a Jewish man."

The Daily Stormer is now claiming to be "The World's #1 Yair Netanyahu Fansite."

George Soros has long been an enemy of Netanyahu.

"As a Holocaust survivor, a successful financier who embraces free market capitalism and a philanthropist who champions liberal democracy, George Soros should be a darling of the Israeli establishment," Mairav Zonszein wrote in the New York Times. "But Mr. Soros has failed the only litmus test that seems to count for Israel’s current leadership: unconditional support for the government, despite its policies of occupation, discrimination and disregard for civil and human rights."

"For Mr. Netanyahu, ideally there would be no daylight between Jewish identity and Israeli identity. Mr. Soros represents an obstacle to this project because he is such a high-profile figure among the communities of the Jewish diaspora that do not necessarily have a strong identification with Israel — or worse, that are critical of it," Zonszein explained. "In pursuing his strategy, Mr. Netanyahu has repeatedly alienated a majority of American Jews on both political and religious grounds."

Prime Minister Netanyahu refused to answer questions about the meme his son posted and deleted during a Sunday cabinet meeting.

"This isn't a press conference, but thanks for asking," Netanyahu responded.

When Hungarian Prime Minister Viktor Orbán plastered his country with anti-Semitic posters attacking Soros, Israel's ambassador to Hungary, Yossi Amrani demanded the posters come down because they were fueling anti-Semitism.

Netanyahu "clarified" the statement to read, "in no way was the statement meant to delegitimize criticism of George Soros, who continuously undermines Israel’s democratically elected governments by funding organizations that defame the Jewish state and seek to deny it the right to defend itself.”

"Soros has been a supporter of J Street since the 'pro-Israel, pro-peace' organization was founded as an effort to counteract AIPAC’s influence, lobbying the White House and Capitol Hill to push for an Israeli-Palestinian peace settlement," Haaretz noted. "He also supports Human Rights Watch and Amnesty International – groups that regularly chastise and criticize Israeli policies."