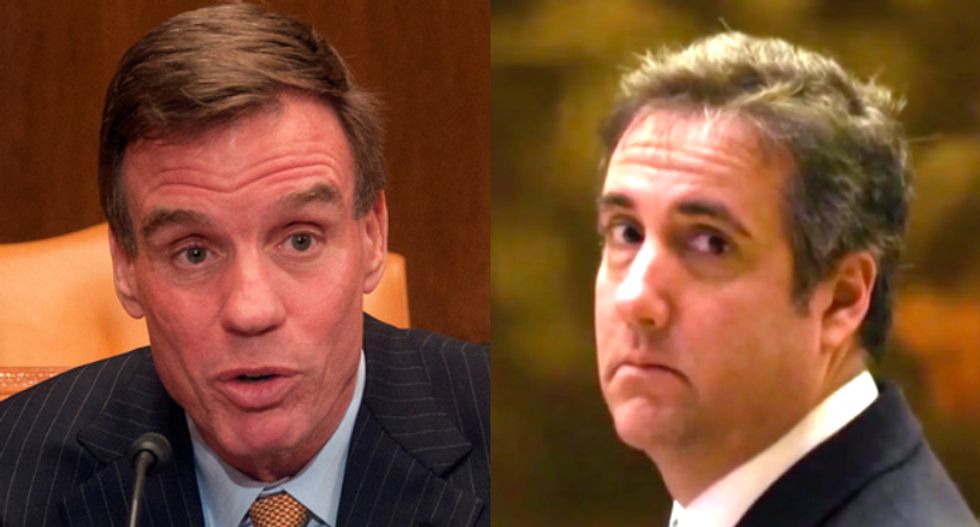 Yesterday, President Donald Trump's lawyer Michael Cohen leaked a statement to the press that included a blanket denial of any collusion with Russia prior to his testimony before the Senate Intelligence Committee.

That maneuver, one of the committee's members told CNN's Jake Tapper, didn't work out as intended.

"Mr. Cohen, who's had a colorful past to say the least, I think tried to pull a fast one and tried to put out a public statement," Sen. Mark Warner (D-VA), the vice chairman of the Senate Intelligence Committee, told Tapper.

After Cohen's prepared statement for the committee went public, they canceled the meeting and will instead subpoena Cohen to testify publicly in October.

"We said you want to violate our rules, fine, we'll have you back in public and let all the committee members ask him questions directly," Warner continued.

In his statement, Cohen claimed he has never "engaged with, been paid by, paid for, or conversed with any member of the Russian Federation or anyone else to hack or interfere with the election," and that the infamous British spy dossier that mentioned him by name "was riddled with total falsehoods and intentionally salacious accusations."

Between mentions of him in the dossier and his role in the failed Trump Tower Moscow project, Warner said "there's a lot of questions Mr. Cohen has to answer."

Cohen denied allegations of impropriety in his efforts to help build Trump Tower Moscow, saying it "was solely a real estate deal and nothing more."

"I was doing my job," Cohen wrote.

Watch Warner tear down Cohen's statement below, via CNN.