'I just can't take the pain': C-SPAN caller bawls on air because NFL players kneeling 'hurts too much' 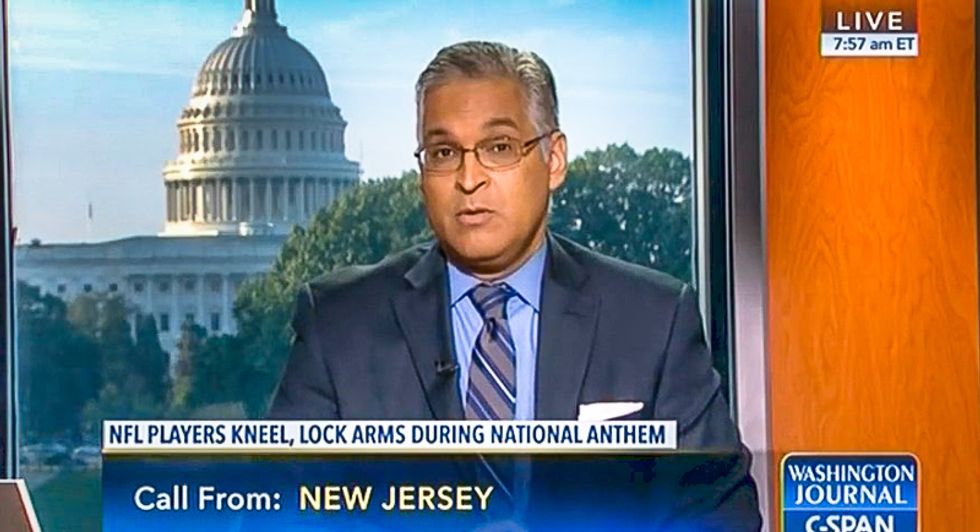 A C-SPAN caller on Monday began crying on the air because she said NFL players who are protesting the national anthem made watching football "too painful" for her.

The caller on Washington Journal's "independents line" explained to host Pedro Echevarria that she was boycotting the NFL because she agreed with President Donald Trump's assertion that players should have more respect for the American flag and national anthem.

"I'm a big huge football fan but I can't watch it anymore because it brings tears to my eyes," Sharon from Williamstown, New Jersey explained. "It's too painful so I can't do that."

According to Sharon, the flag "is a symbol of imperfect people in an imperfect country always trying to do the right thing."

"It's just shameful and it hurts me to see people taking a knee when we are supposed to be joyful about living in this country," she said. "After I saw what happened [with players kneeling during the anthem], I tried to watch it and I just couldn't because I just kept crying."

And true to her word, Sharon broke down in tears.

"I just don't understand why people do these things," she sniffled. "I miss my Monday nights. I'm an addict. I have two televisions on watching two different timezones. I'm crazy about football but I just can't take the pain."

"It hurts... too much," Sharon concluded.