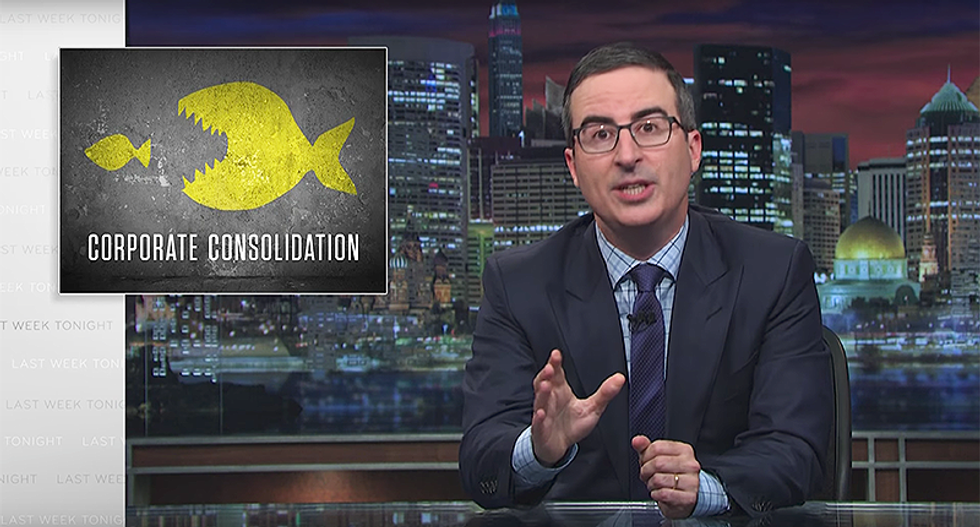 If there's one thing John Oliver knows about personally, it's corporate consolidation. His network, HBO, is owned by parent company Time Warner, which is attempting to merge with AT&T. The same move has been attempted by airline giants and even makeup manufacturers to make not just a multifaceted corporation but an uber corporation.

"It's true, 'small businesses are the backbone of our economy' is that rare thing that every politician agrees on," Oliver said Sunday, quoting several politicians. Yet, despite what politicians might say, America is not in some "golden age of small-business startups," and the rate of startups has dropped to a level lower than even the 1970s. Oliver explained that this is due, in part, to rampant corporate consolidation.

Oliver admitted given the merger his parent company is trying to do, this story is a little dangerous for him. "That is, assuming AT&T can get their sh*tty service to work long enough to actually see this," he mocked. "AT&T, it's the top telecom company around alphabetically and nothing else."

This happened, despite antitrust laws on the books, the scales have tipped toward merging companies. "Which, has lead to real problems," Oliver explained. "Let's start with the obvious, the workers. Mergers can often mean big layoffs. But it's not just employees that can suffer, consumers can too."

The worst example comes from the airline industry, where, in 2000, there were once 10 airline companies, today there are merely four. They dominate 83 percent of the entire airline market. Even rental car companies are dominated by the top three and beer companies are owned by just two corporations. When it came to search engines, Oliver explained they are all owned by "Bing" which he explained "is the best way to google something."

Even CNBC's loud host Jim Cramer explained that competition is bad for business but better for consumers. While monopolies are against the law, an oligopoly is perfectly fine. It's where only a handful of companies control an entire industry. Looking back at airlines, Oliver went on to quote an airline executive who said that the mergers have allowed them to "ancillary revenues" which are all of the fees that drive consumers crazy. Back in 2008, American Airlines was the first to charge passengers for their first checked bag. It was just $15 at the time, but in less than 10 years, that has ballooned to double and airlines are all doing it in tandem with each other, leaving consumers no way to fly without a checked bag fee. Ten years ago, those fees generated $514 million and today it's more like $4.2 billion in revenue.

"If I wanted fees getting raised all the time despite sh*tty service, I would become a customer of AT&T," Oliver said. "Yeah! F*ck you AT&T! Even if you take over you'll never be my real dad!"

Thanks to consolidation of the airlines "they don't really even need to give a sh*t about what you think," Oliver went on. His example was the physician literally dragged off of a United Airlines plane and punched in the face when he refused to leave. "In wake of that incident, people said it was a PR nightmare and there was talk on Twitter of boycotting United Airlines," Oliver said. "The problem is, on certain routes, they're the only option. So, a boycott is going to be pretty hard to pull off. That's arguably why their CEO was later able to open his earnings core from that quarter by giving a special thanks to customers by saying the company is "finding new and better ways to service them and make them more comfortable on our airline."

Even Oakley went up against glasses company Luxottica and they then refused to sell the brand in Lenscrafters, Target Optical and at the Sunglasses Hut. Oakley's stock price collapsed. They ultimately "merged" with Luxottica in 2007, meaning they actually fought the company, lost and then Luxottica bought out the entire company.

"We seem to have forgotten how important antitrust is," Oliver closed. "And we're all being forced to live with the consequences. This issue affects almost everything you do. Angry at banks? Well the industry is dominated by just these four. Frustrated with your health insurance provider, odds are it's one of these."

Oliver went on to note that if the story is infuriating "so much that you're yearning for the sweet escape of death, well bad luck. Because the casket industry is controlled by these three companies. And it actually gets worse, the afterlife is controlled by one religion, I'm not saying which one, but when you find out you're going to be so mad. The point is, we have laws to prevent the worst effects of consolidation and it may well be time to more aggressively use them to impose stricter standards and to empower the FTC and the DOJ's antitrust divisions."