Maddow sounds the alarm: Lawyer for a Russian bank under investigation for 2016 meddling is about to join the DOJ 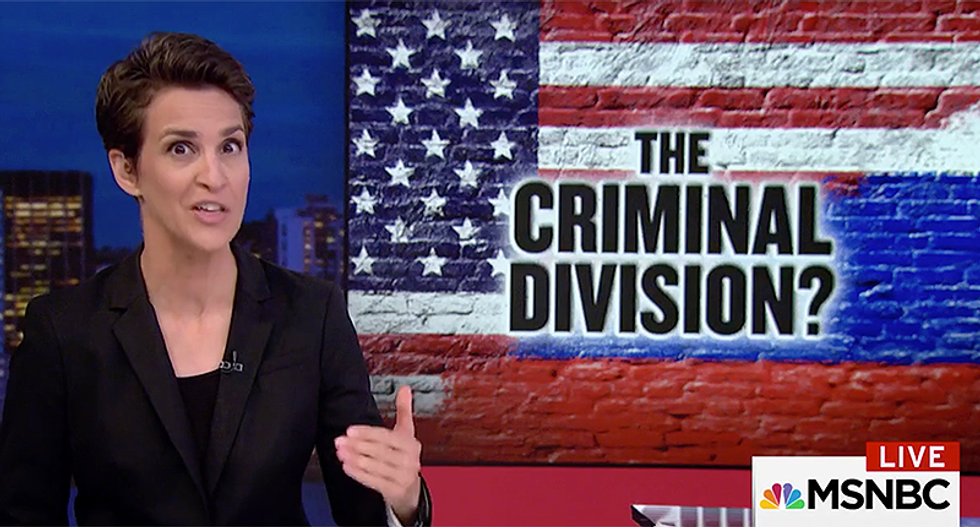 On Thursday, MSNBC's Rachel Maddow sounded the alarm on a story she said isn't getting enough attention given the firehose of news coming out of President Donald Trump's White House.

Trump's nominee to chair the Justice Department's criminal division previously served as the attorney for a Russian bank that was named in the infamous dossier known as the infamous "golden showers" dossier. Brian Benczkowski previously worked for Trump's campaign as well as the liaison between the transition team and the Justice Department before taking the job for Alfa Bank to sue BuzzFeed for publishing the dossier.

Alfa Bank was known for sketchy computer server issues during the 2016 campaign that still are unexplained to this day, Maddow noted. It was revealed in October 2016 that there were exclusive servers interacting between Alfa Bank and the Trump Organization in Trump Tower during the campaign.

"There were further allegations about AlfaBank being involved in the Russia influence campaign to swing the election for Trump," Maddow explained. "Alpha Bank sued BuzzFeed for publishing the dossier, and then they also made a very eyebrow raising higher here in the U.S. when they decided to put together a high-powered legal team to defend themselves against news reports and investigations into that thing with their server and the Trump Organization."

The man they hired was Brian Benczkowski, Maddow explained. With zero experience in court or as a prosecutor, he was nominated to run criminal cases for the Department of Justice. If the full Senate approves his nomination, he will officially be the fox guarding the hen house.

"From an American perspective, that seems like a slightly shady way to approach this, right? It's like Alfa Bank doesn't know hiring somebody from the campaign to clear you and the campaign of any wrongdoing..." Maddow said, laughing. "That might be how you things in Moscow but it's not how you're supposed to do things here. Or maybe it is now."