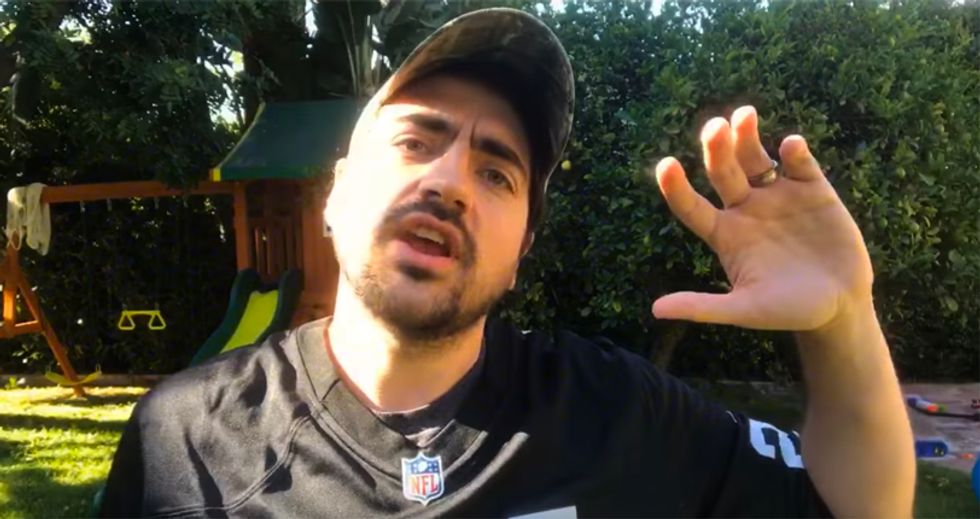 Commentator and comedian Trae Crowder, who goes by Liberal Redneck, had a few things to say about Donald Trump's jihad on protesting NFL players, saying it all comes down to one basic truth about the president - it presented him with an opportunity to be racist.

In a video posted to YouTube, Crowder began by pointing out that Trump -- appearing before a predominately all-white audience in Alabama -- knew what he was doing and played to their bigotry.

Black NFL players protesting racial inequality allowed Trump to do "what’s really important to his base, what truly matters ... the spontaneous opportunity to be explicitly racist in public.”

"Trump took a totally left-field shot-across-the-bow that athletes who protest by kneeling during the National Anthem, and it worked like a charm, buddy," Crowder explained.

Touching on Trump supporters' claims that the athletes are "disrespecting the flag," Crowder provided a counter-example of what would get a pass at sporting events -- wearing a t-shirt featuring a star-spangled eagle.

"I could cut the sleeves off this bad boy, wear it to a NASCAR event, stop in the parking lot and get me a copy of the battle flag of a failed state that waged a treasonous war against America, go inside and fly that son of a bitch all day long. Pounding beers until I was so drunk that I pissed through -- and all over -- these sons of bitches," he explained while holding a pair of shorts molded after the American flag, "and all any of you would say is, 'Goddamn son, you'll be fine."

With that Crowder moved on to take a knee in solidarity with the athletes, and in protest against racial inequality in America.