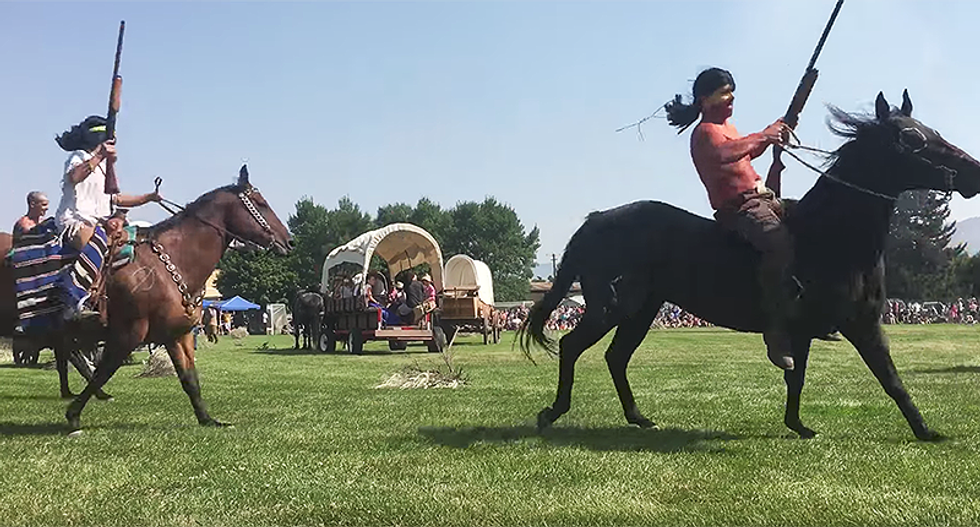 The annual Wellsville Founders’ Day Parade and Sham Battle brings people together to celebrate the founding of their town. But it's the battle that is causing Native Americans to speak out.

According to a KSTU report, the faux re-enactment depicted people painted in redface fight against those dressed as Mormon settles.

One white woman dressed in redface said she loves the event because it allows her to dress up and show others how the town was established.

“You kind of get to act crazy, and hoop and holler, and ... like you’re a threat,” she described the battle between Native Americans defending their land.

However, the battle never happened.

City Manager Scott Wells told The Herald Journal the Sham Battle goes back to drills militias would do to train for self-defense during the colonization westward.

“Pioneers would dress up and act like attacking Indians so that the militia could practice their skills,” Wells said.

While there haven't been any battles, the tradition began in 1930 and has continued until today.

“It’s just a tradition that’s carried on,” Mayor Thomas Bailey said, as an excuse. “And that’s the only purpose for it. It’s just something that young people in Wellsville have enjoyed doing.”

During the performance, a wooden building was set ablaze and an announcer read the story about the fictitious battle.

“The settlers had to be cautious about the hostile Indians, and they had to guard their horses and cattle day and night,” the announcer said.

They went on to describe hard-working white families being forced to fight for their lives as Native people burned their buildings to the ground.

His is one of the several groups lobbying the city to stop the practice. Although, he didn't attend the fake re-enactment, he did see a video of it and said that he couldn't believe what he saw.

“This is just nothing but a false portrayal, a racist portrayal,” he continued. “It’s ignorant, and it’s offensive.”

While the Battle of Bear River is a documented event against the U.S. military, but a Wellsville battle between Mormon settlers and Native Americans never took place.

“Pioneers were attacked by this outside force, is just a false narrative. It’s just not true,” Lucero said.

But it's the re-enactment of Native Americans painted red with war paint on their face he finds disrespectful.

“To portray the Indians as the savages is just... We’re supposed to be over that portrayal,” he said. “It’s just not right.”

His group is planning a rally before the next Wellsville city council meeting, though he hopes he can educate those in the community who might not understand they're being racist.

“What I think they’d like to see at least, is that Wellsville come out strongly and say, ‘We don’t support a racist portrayal of the relations between settlers, pioneers and the Indians,” he said.

Watch the "festival" battle at the video below: