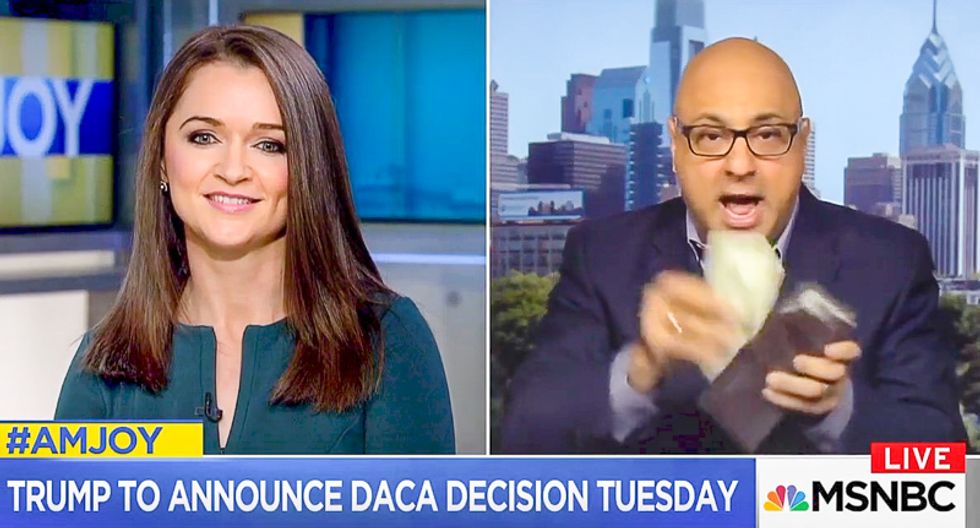 MSNBC host Ali Velshi, who is a Canadian immigrant, shot down the notion that conservatives could point to Canada's immigration system as proof that the policy protecting Dreamers who were brought to the U.S. as children should be abolished.

During a panel discussion on MSNBC's AM Joy, anti-Dreamer activist Carrie Sheffield argued that Dreamers and other immigrants were a drag on the U.S. economy.

"Illegal immigrants are here, most of them are low skilled, about 50 percent are high school dropouts or high school only," Sheffield said. "We need to be much more deliberate about who we let into the country. I am all for more immigrants, we need more immigrants of all colors: black, white, Latino, polka dot."

"But we need to be deliberate in making sure we are like Canada," she continued. "Basically, Canada is so strict on who they let into the country and yet they have more immigrants, but they are focused on education."

With the mention of the Canadian immigration system, Sheffield had unknowingly walked into Velshi's trap.

"I'm a double immigrant. I emigrated as a baby to Canada and then as an adult to the United States," Velshi replied, rubbing his hands together. "Let me tell you what happens in Canada. Canada let's refugees in at a much higher rate than America does without any regard to their education."

"Never bring up Canada in an immigration conversation," he advised. "Secondly. Google, Facebook and Apple wanting cheap labor. The average salary at Google is $121,000; at Apple, it's $87,000 and Facebook it's $138,000 before bonuses. This isn't about cheap labor."

"One final thing," Velshi said as he pulled out a somewhat worn wallet. "Let's say I'm a [Deferred Action for Childhood Arrivals] DACA person and 26 years old. I'm making money legally above the table... I'm good for the economy any way you slice it. Ending DACA doesn't make sense."