‘Not part of KKK’: Man in white hood and robe insists he is just warning students about evolution 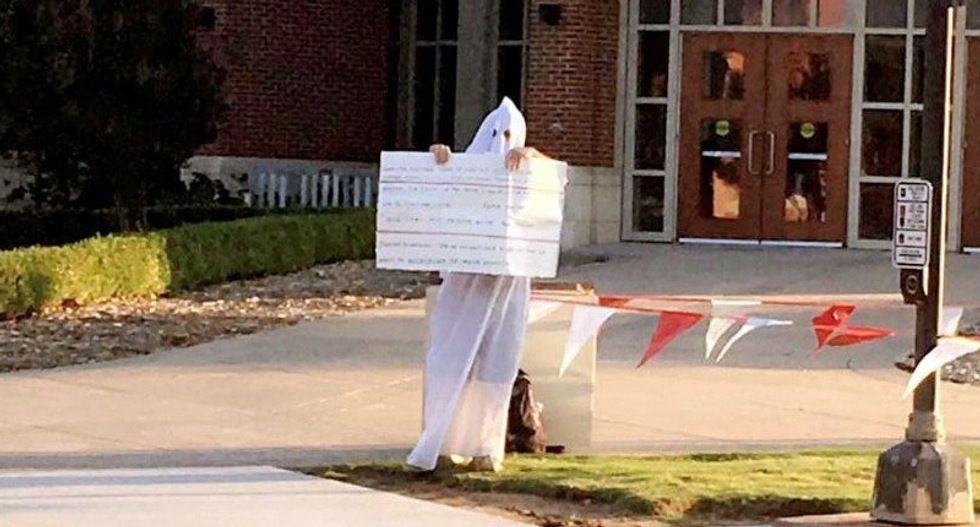 Man wearing a white hood and robe at the University of Oklahoma campus in Norman.

A man wore a "KKK outfit" of white hood and robe while protesting at the University of Oklahoma.

"The individual from out of state is not affiliated with OU in any way and does not represent the values of the university family," OU told KFOR. "University officials have been monitoring the situation closely to ensure the safety of the OU community."

The man was allowed to stay after taking off his white hood, KOCO reported.

His sign uses terms including, "exterminate and replace the savage races," "so negroes did good and their skin became white" and "we want to exterminate the negroe (sic) population" while claiming attribution from Darwin, the Book of Mormon and Planned Parenthood.

"I'm definitely not part of the KKK, I'm here to expose the racism that is taught at OU by the theory of evolution," the man in the KKK outfit told KFOR.

Reporter Ian Smith asked the man if he thought his points were being well taken.

"I don't think it will be at first, I think that it will encourage dialogue and maybe after the emotions calm down, in time they'll realize, 'well that was rough, that was about as pleasant as rubbing alcohol on a scrape, but it did good,'" he hoped.