‘Perilous for the President’: Fox’s Napolitano explains why new developments in Mueller probe are ‘very bad’ for Trump 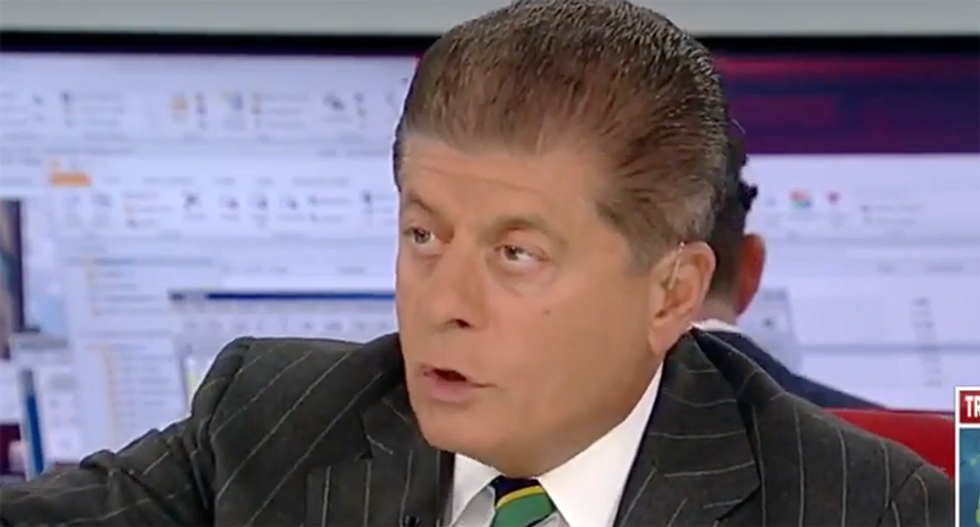 "It's perilous for the President if [Paul] Manafort is indicted because the standard M.O. of federal prosecutors when they're after a so-called big fish is to indict people in the circle of the person, even on unrelated matters," former New Jersey Superior Court Judge Andrew Napolitano explained to Shepard Smith

"They will be holding this sword over his head and will use it as an instrument with which to try and flip him to becoming one of their own witnesses against the president and they have other potential targets as well," Judge Napolitano predicted.

Judge Napolitano zeroed in on the fact the FBI picked the lock of Manafort's door during a dawn raid with a no-knock search warrant.

"For a judge to sign a search warrant permitting a pre-dawn raid without a knock where the defendant is not a violent person... means that the FBI satisfied the judge that they believe that Manafort was untrustworthy and would likely destroy evidence," Judge Napolitano noted. "That is the very, very narrow circumstance under which they would permit that almost Soviet-like attack on an American citizen under cover of darkness."

"How serious is this becoming for the administration in your estimation?" Smith asked.

"Very serious, I think this is a very bad week for the President if you combine it with what else we learned -- that his two private lawyers sat in a restaurant in Washington D.C. and discussed openly among them the defects in their case. Unknowing to them within earshot was a reporter for The New York Times," Napolitano continued. "The New York Times printed it as a front-page story, none of it has been denied."

"So Bob Mueller, the special counsel, now knows the defects in the president's defenses because his lawyers were blabbing about it in the public restaurant," Judge Napolitano concluded.

"There've been no denials of this and it's very bad," Judge Napolitano concluded. "It shows that there's a clash of the personal lawyers representing Trump as a private person and White House legal counsel representing the presidency.

"Who is resolving those disputes?" Judge Napolitano asked rhetorically. "General Kelly and he's not a lawyer."