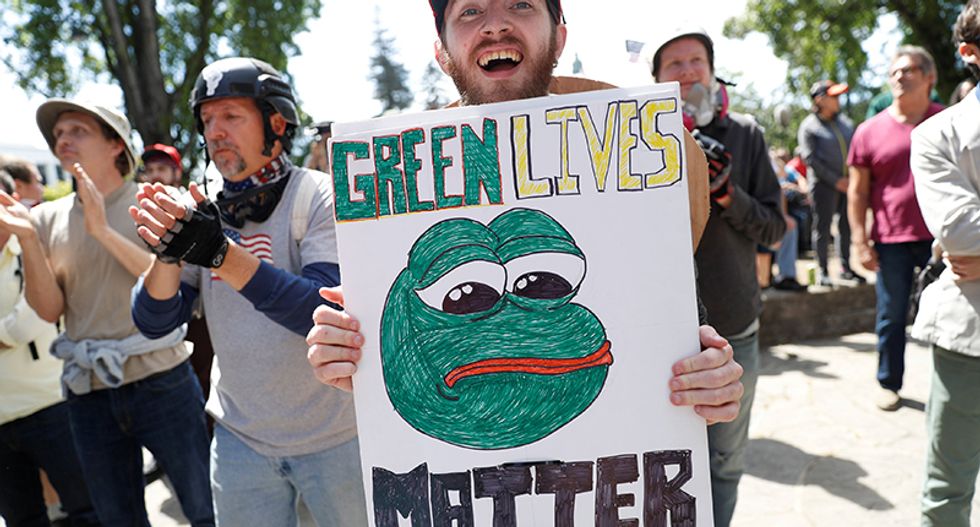 After months of promotion, the right-wing "Free Speech Week" at the University of California at Berkeley completely fizzled. Now, newly uncovered emails suggest that organizers planned for the event to fail "from the get-go."

According to CBS News, the few dozen supporters who bothered to turn out at Berkeley's Sproul Plaza were outnumbered by a slightly larger crowd of counter-demonstrators.

Yiannopoulos, said CBS, "blew kisses, posed for selfies and led a rendition of 'The Star Spangled Banner' before leaving. The appearance lasted less than a half hour before the crowds dispersed."

A native of Kent, England, the disgraced right-wing provocateur wore a denim jacket and a hoodie emblazoned with U.S. flags. Yiannopoulos -- who aspires to Cher-like single name notoriety as "Milo" -- was forced to resign from Breitbart.com earlier this year when video emerged of him attempting to normalize pedophilia in a talk show appearance.

The New York Times said that "Free Speech Week" was beset by a number of problems in recent weeks, including the failure of campus conservative newsletter the Berkeley Patriot -- which sponsored the event -- to arrange for indoor venues, security and other basic concerns of hosting a conference.

Co-organizer Lucian Wintrich of GatewayPundit.com dropped out last week in the run-up to the event, citing disorganization and calling the chaos around the event "a sh*tshow."

“A lot of my friends, we had all planned on speaking at and attending this event, and last week it got very weird,” Wintrich said. “It got really shifty.”

The Mercury News said that there is abundant speculation -- even among conservative supporters -- that the event was never intended to happen at all, that organizers planned for it to fail and were intent on framing it as censorship by too-liberal university administrators.

Emails obtained by the Mercury between Wintrich and UC Berkeley spokesman Dan Mogulof suggest that organizers never expected the event to take place.

On Saturday morning, Wintrich told Mogulof, “It was known that they didn’t intend to actually go through with it last week, and completely decided on Wednesday."

“Wait, whoah, hold on a second,” replied Mogulof. “What, exactly, are you saying? What were you told by MILO Inc? Was it a set-up from the get-go?”

Watch video of counter-protesters in Berkeley, embedded below: