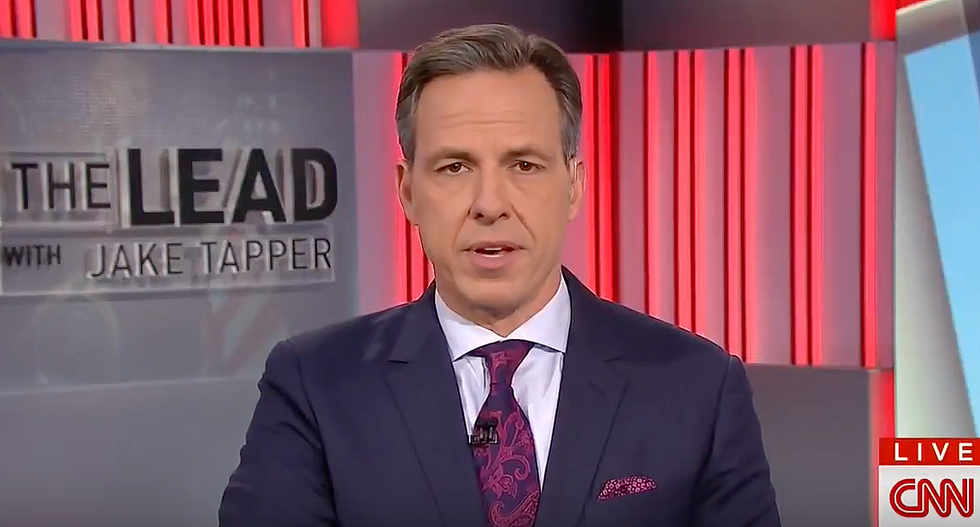 CNN’s Jake Tapper on Monday admonished Donald Trump for calling NFL players who kneel during the anthem "sons of b*tches,” accusing the president of “looking for divisions to exploit in the nastiest manner possible.”

Tapper was discussing Trump’s comments during a Friday rally in Alabama for Senate candidate Luther Strange, during which the president implored NFL owners to fire players who exercise their right to peacefully protest.

“President Tump this weekend exacerbating an already contentious debate in the culture wars  by picking a side, and doing so willingly, enthusiastically and really rather crudely,” Tapper began Monday.

“Let us begin today, our discussion, with the simple proposition that for most Americans, where you come down on the debate over protests during the National Anthem at a football game is not wrong per se,” Tapper said. “That those who want take a knee or raise a fist are doing so not because they hate America, or the flag or the anthem, but because they love them and they want the United States of America to be the best she can be, and they see too much racial injustice to do nothing.”

On the other hand, Tapper noted, people those are offended by individuals protesting the anthem “are not necessary wrong, and they have right to their feelings and should not be treated as hostile to the desire for racial justice.”

“That's where we as a nation were until Friday evening,” Tapper said. “Some people were protesting, some people were disagreeing with the protests, some were booing and changing the channel. Then, President Trump stepped into the debate this way.”

Tapper then called BS on Trump’s assertion over the weekend that his comments regarding football players protesting the flag were never about race.

“It is 100 percent true that the president never said anything about race,” Tapper continued. “He did not have to. This entire discussion is about black men protesting racial injustice. One, of course, wonders why in the president's view a black man protesting racial in justice by kneeling during the anthem is a ‘son of a b*tch' while whites marching along Nazis and the Klan to protest the removal of the statue of a Confederate general is ‘very fine person,’ but I digress.”

The CNN host later played a clip of Trump, just last year, referring to NFL free agent Colin Kaepernick’s right to protest the anthem, “one of the beautiful things about the country.”

“That's one of the beautiful things about this country,” Tapper repeated. “But something has changed. Now President Trump wants us to be having this debate, and apparently he wants us to be doing it in an ugly and angry manner.”

“A year ago we hosted a town hall with troops and veterans and President [Barack] Obama was asked about Kaepernick and others who are on a knee,” Tapper noted, playing a clip of Obama urging people on both sides of the kneeling debate “to listen to the pain” they may be causing to their fellow citizens.

“Hmm, listening to each other and thinking about what the other person said, instead of just calling those with whom we disagree a ‘son of a b*tch,’” Tapper said. “That feels today almost as radical concept as trying to unite the country instead of looking for divisions to exploit in the nastiest manner possible.”