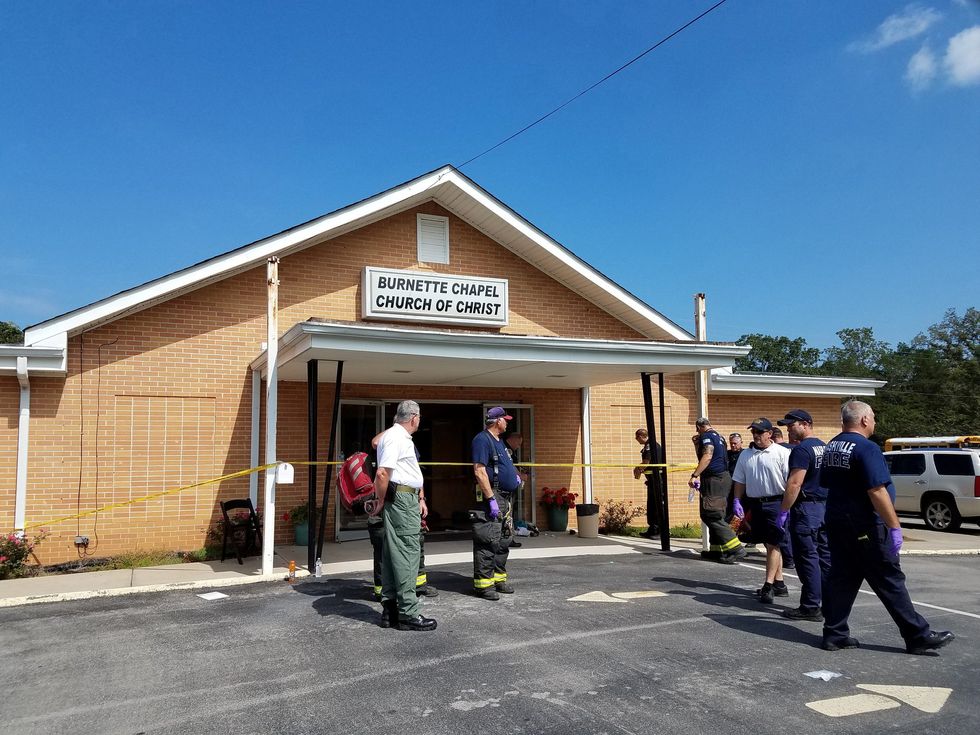 The scene where people were injured when gunfire erupted at the Burnette Chapel Church of Christ, in Nashville, Tennessee, U.S., September 24, 2017. Metro Nashville Police Department/Handout via REUTERS

A masked gunman killed a woman in the parking lot of a Tennessee church on Sunday morning and wounded six worshipers inside the building before shooting himself in a scuffle with an usher who rushed to stop the attack.

As the church usher grappled with the suspect, he was struck in the head with the gunman's weapon before the suspect fired and wounded himself, police said. Although injured, the usher, 22-year-old Robert Engle, then retrieved a gun from his vehicle, re-entered the sanctuary and held the suspect at bay until police arrived.

"This is an exceptionally brave individual," Aaron said of the usher during a briefing outside the church in Antioch, about 10 miles (16 km) southeast of downtown Nashville.

Police had not determined the motive behind the shooting, but the spokesman said certain items were found that might establish why the man opened fire.

Samson was treated at a local hospital and released. He will be charged with murder and attempted murder, police said in a Facebook post.

Melanie Smith, 39, of Smyrna, Tennessee, was fatally shot in the parking lot, where she was found lying next to the suspect's blue sport utility vehicle, which was idling when police arrived.

Police said it was not immediately known if the suspect had any previous connection with the church, where about 50 people were worshipping when the gunman entered.

The usher, who was "pistol-whipped," was also taken to a hospital, police said.

The church's pastor, Joey Spann, was shot in the chest and was being treated at a hospital, WKRN television news channel reported, citing the pastor's son. The Nashville Christian School, where Spann is a coach and Bible teacher, said Spann's wife was also injured.

Nashville Mayor Megan Barry said in a statement the shooting was "a terrible tragedy for our city."