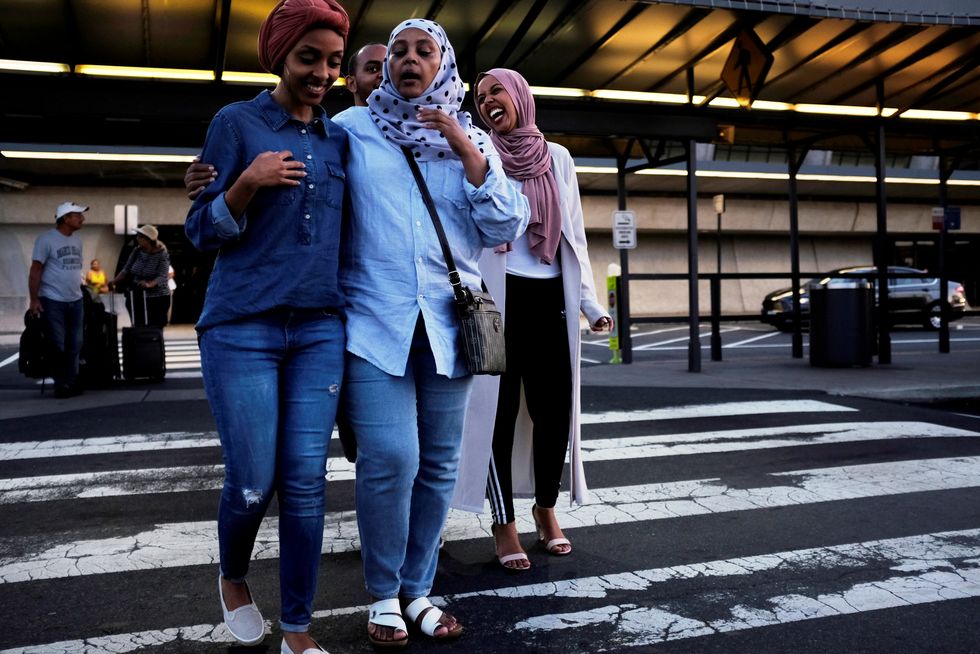 A family walks out of the international arrivals at Dulles International Airport in Dulles, Virginia, U.S. September 24, 2017. REUTERS/James Lawler Duggan

WASHINGTON (Reuters) - President Donald Trump on Sunday slapped new travel restrictions on citizens from North Korea, Venezuela and Chad, expanding the list of countries covered by his original travel bans that have been derided by critics and challenged in court.

Iran, Libya, Syria, Yemen and Somalia were left on the list of affected countries in a new proclamation issued by the president. Restrictions on citizens from Sudan were lifted.

"Making America Safe is my number one priority. We will not admit those into our country we cannot safely vet," Trump said in a tweet shortly after the proclamation was released.

Iraqi citizens will not be subject to travel prohibitions but will face enhanced scrutiny or vetting.

The current ban, enacted in March, was set to expire on Sunday evening.

The addition of North Korea and Venezuela broadens the restrictions from the original, mostly Muslim-majority list.

An administration official, briefing reporters on a conference call, acknowledged that the number of North Koreans now traveling to the United States was very low.

Trump received a set of policy recommendations on Friday from acting Secretary of Homeland Security Elaine Duke and was briefed on the matter by other administration officials, including Attorney General Jeff Sessions and Secretary of State Rex Tillerson, a White House aide said.

Earlier on Sunday, Trump told reporters about the ban: "The tougher, the better."

Rather than a total ban on entry to the United States, the proposed restrictions would differ by nation, based on cooperation with American security mandates, the threat the United States believes each country presents and other variables, officials said.

After the Sept. 15 bombing attack on a London train, Trump wrote on Twitter that the new ban "should be far larger, tougher and more specific - but stupidly, that would not be politically correct."

The expiring ban blocked entry into the United States by people from the six countries for 90 days and locked out most aspiring refugees for 120 days to give Trump’s administration time to conduct a worldwide review of U.S. vetting procedures for foreign visitors.

Critics have accused the Republican president of discriminating against Muslims in violation of constitutional guarantees of religious liberty and equal protection under the law, breaking existing U.S. immigration law and stoking religious hatred.

Some federal courts blocked the ban, but the U.S. Supreme Court allowed it to take effect in June with some restrictions.

The Supreme Court will hear arguments on Oct. 10 on whether the current ban discriminates against Muslims in violation of the U.S. Constitution, as lower courts previously ruled.