Trump spent dinner with conservatives bashing AG Sessions for Russia recusal: 'You could feel it dripping with venom' 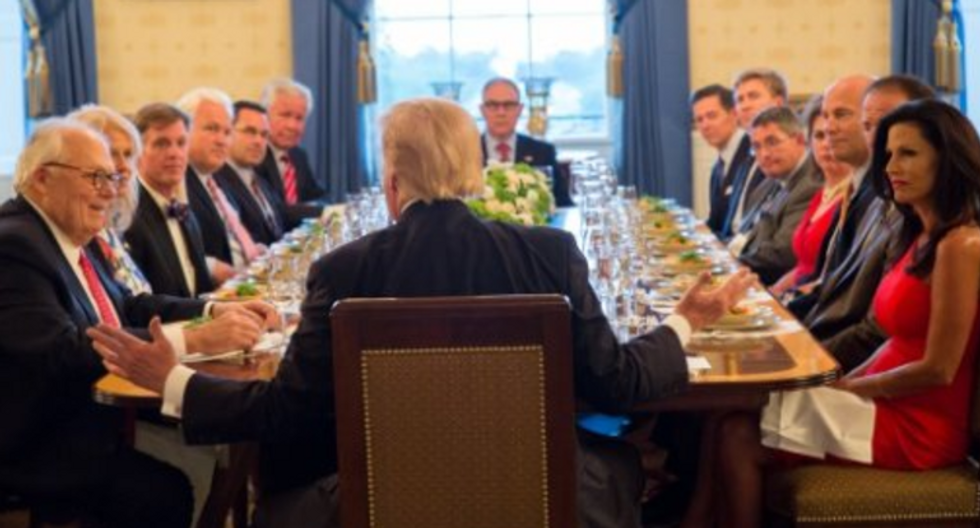 Donald Trump on Monday met with conservative leaders for a dinner in the Blue Room at the White House, during which he re-upped his criticism of Jeff Sessions over the attorney general’s decision to recuse himself from the Department of Justice's investigation into Russian meddling in the 2016 presidential election.

According to the Wall Street Journal’s Rebecca Ballhaus, attendees at the dinner could feel Trump's speech “dripping with venom” as he derided AG Sessions, yet again, for removing himself from the department’s probe.

In dinner w/conservative groups tonight, Trump yet again went off on Sessions for recusing himself from Russia probe, per source in the room
— Rebecca Ballhaus (@Rebecca Ballhaus) 1506395596.0

Sessions was forced to recuse himself in May following concerns over conflicts of interest after it was revealed he failed to disclosed multiple meetings with the Russian envoy. Trump has called that decision "very unfair to the president,” arguing he would not have hired Sessions as attorney general had he known he would step aside.

“Sessions should have never recused himself, and if he was going to recuse himself, he should have told me before he took the job and I would have picked somebody else,” Trump told the New York Times in June.

“Jeff Sessions takes the job, gets into the job, recuses himself, which frankly I think is very unfair to the president,” Trump later added. “How do you take a job and then recuse yourself? If he would have recused himself before the job, I would have said, ‘Thanks, Jeff, but I’m not going to take you.’ It’s extremely unfair—and that’s a mild word—to the president.”

Shortly after that interview, the president referred to Sessions as "beleaguered" and “weak,” and questioned whether the former Alabama Senator merely backed then-candidate Trump because he “won the state by a lot, massive numbers.”

Trump also reportedly used the meeting to praise his recent attacks on the NFL, telling attendees the issue has “really taken off.”

At WH dinner, Trump said the NFL issue has “really taken off,” per source. “He was happy—he feels like he’s clearly winning that exchange."
— Rebecca Ballhaus (@Rebecca Ballhaus) 1506395800.0