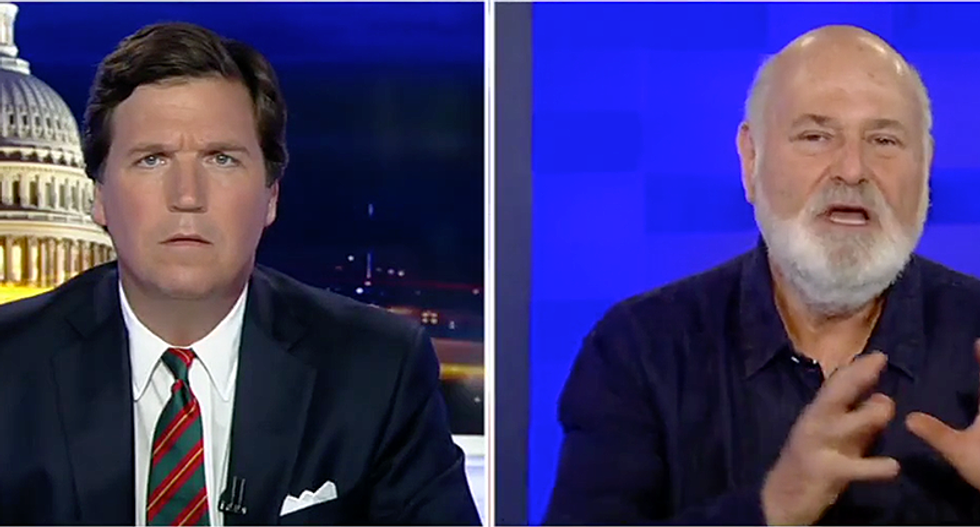 Filmmaker Rob Reiner handed it to Tucker Carlson Thursday when the Fox News host tried to belittle the importance of Russia's invasion in the U.S. election.

Carlson began by wondering why Reiner wasn't demanding Trump send in the F-15 fighters to bomb St. Petersburg if his new ad says "we're at war." Reiner tried to explain that it's a cyber war, which Carlson refuted.

"If you watch the entire video, it talks about cyberwarfare" Reiner explained. "It talks about how he was able to use the internet and cyber tools to attack the U.S. democracy, which is what they did."

Carlson told Reiner that he should clarify in the video "we're not really at war," dismissing the hacking of a democracy as a serious issue.

Reiner again encouraged Carlson to watch the full video where it explains what the cyberwar was about and how it was conducted according to intelligence. He named off the various ways we now know the Russians, or people connected to Russia, were using the internet to help attack Hillary Clinton and boost Donald Trump. He admitted that we're accustomed to propaganda being used in elections, what is unique in this situation was the use of propaganda to specifically target and advertise to those in swing states on Facebook.

Carlson tried to accuse Reiner of colluding with far-right warmongers who've supported full on violent wars in the past and wondered why he would align himself with these types of people as a liberal. Reiner explained very simply that people on both sides of the political aisle believe Russia invaded the U.S. when it sought to impact American democracy.

"We're not advocating going to war, or going to a traditional war," Reiner said.

"Well, you should say that," Carlson demanded.

"But we're already in a cyber war with them," Reiner countered. "People want to turn their heads at that and it's at their own peril. The point I'd like to make, and this is really important for people to understand because this doesn't have anything to do with Donald Trump. Trust me, Donald Trump, whatever happens to him, is going to happen to him, I mean there are already investigations. Muller is going to find what he finds. The House and Senate have their own investigations. They'll find whatever they find. But beyond that, we've been invaded in a certain way and the thing that has been so upsetting to me, I don't know how old you are Tucker, but when I was young we had to hide under a desk because we were worried we were going to get attacked by a nuclear bomb.

He went on to say that when the country has been attacked in the past, whether 9/11 or Pearl Harbor, "we've come together as a country to defend ourselves against foreign enemies." America isn't doing that here for the first time in our history. That is a major reason why it is important to him that people see the video.

Carlson said that Hollywood doesn't care about China hacking the US websites and government agencies and that they build movies with the Chinese censors in mind. Reiner countered that the difference is that we've done the same to China. Russia stepped into influence an election and that was "game over."

"It's not about hacking into computers and stealing information, it's about using that information and weaponizing it in some way," Reiner explained. He went on to say he wants people to encourage policymakers to put things in place so that we can protect ourselves as a country.

WATCH: Rob Reiner hand it to Sean by sarahburris