'What is going on in that man's mind?' Trump voters baffled by NFL tweets while Puerto Rico suffers 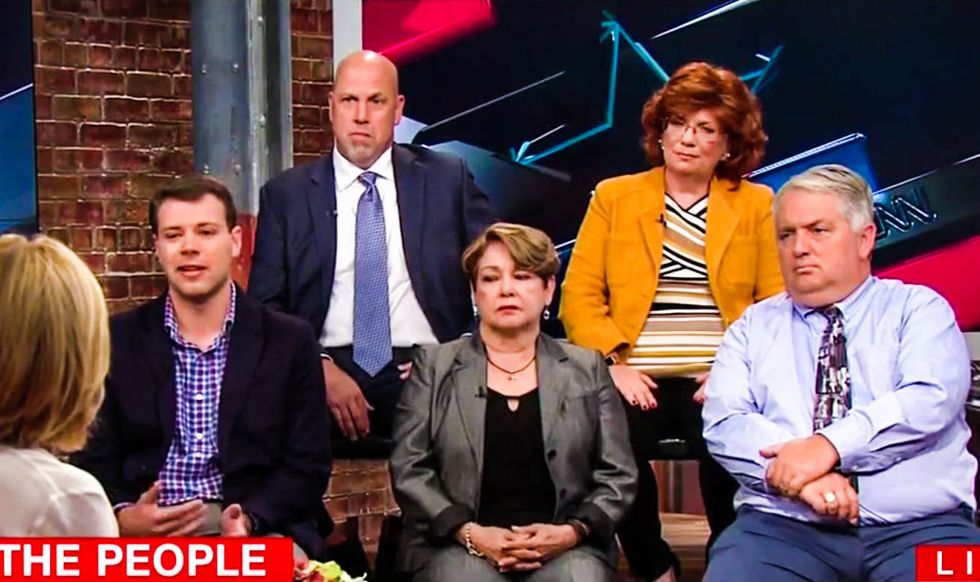 A panel of Trump voters talk about the president's attacks on NFL players on CNN (Screen cap).

CNN had a panel of Trump voters on the show to discuss President Donald Trump's attacks on NFL players who knelt this weekend during the national anthem -- and many of them were not impressed by the president's behavior.

Trump voter Mark O'Brien, for instance, wondered why Trump called NFL players "sons of b*tches," even though he declined to use such forceful language to describe neo-Nazis who marched in Charlottesville, Virginia.

When asked by CNN's Alisyn Camerota why he believed Trump spoke more harshly against NFL players than neo-Nazis, O'Brien admitted he had no idea.

"That is a huge concern of mine," he said. "What is going on in that man's mind?"

Trump voter Jordan Jacquay agreed with O'Brien that Trump's statements were fueling racial tensions at a time when the United States needs a leader who can turn down the emotional temperature.

"A lot of what happened yesterday was in response to what our president said, being very unpresidential, using the term 'son of a b*tch,'" Jacquay explained. "I believe if we're going to continue being the country we are, we have to allow for dissenting opinion."

Camerota then asked Trump voter Payton Isner if he had any thoughts about why Trump was more eager to attack black NFL players than neo-Nazis -- and he admitted he had no good explanation.

"I wish I knew," Isner said. "It completely baffles me."

Isner also said earlier in the segment that Trump's decision to weigh in on the NFL was particularly odd given the humanitarian crisis occurring in Puerto Rico in the wake of Hurricane Maria.