'What is your problem?' MSNBC's Hallie Jackson spanks DACA opponent Kris Kobach for lying about Dreamers 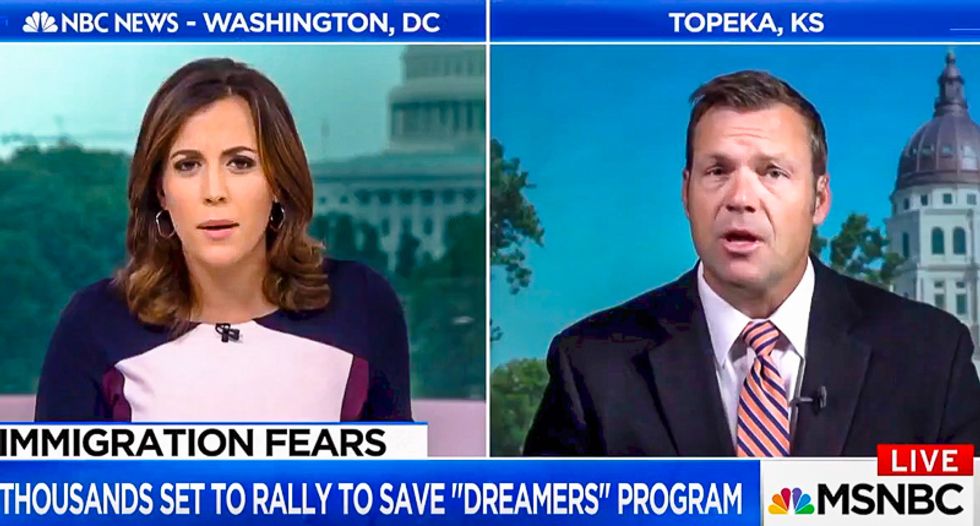 MSNBC host Hallie Jackson on Tuesday confronted Kris Kobach, Kansas' anti-immigrant secretary of state, for repeating falsehoods about so-called Dreamers who were brought to the United States as young children.

As Attorney General Jeff Sessions was preparing to announce the end of President Barack Obama's Deferred Action for Childhood Arrivals (DACA) program protecting Dreamers, Jackson spoke to Kobach in an interview on MSNBC.

"A president cannot do this unilaterally," Kobach opined. "You have to have an act of Congress."

"Why can you have [an anti-Muslim] travel ban unilaterally?" Jackson interrupted.

"There's already a statute that says the president can withhold admission to any category of people," Kobach insisted.

"But if you are relying on Congress," Jackson noted. "And you say there has to be a legislative fix [for DACA], why do you oppose that legislative fix? You've come out and said you're against Congress doing something about it. What's your problem with it?"

According to Kobach, Dreamers are hurting young Americans by taking low-paying jobs. "Why in the world would we legalize an additional 1.7 million people?" he asked.

"There are estimates that the U.S. could lose some $400 billion," Jackson shot back. "You know it's going to affect Kansas... So, why not keep these people?"

"Ninty-one percent of these Dreamers pay taxes," the MSNBC host added. "They're not relying on the American taxpayer, they're relying on themselves as well."

"They are net takers," Kobach charged. "We all pay some taxes when we buy a pack of gum at the store."

"That's not what we're talking about," Jackson replied.