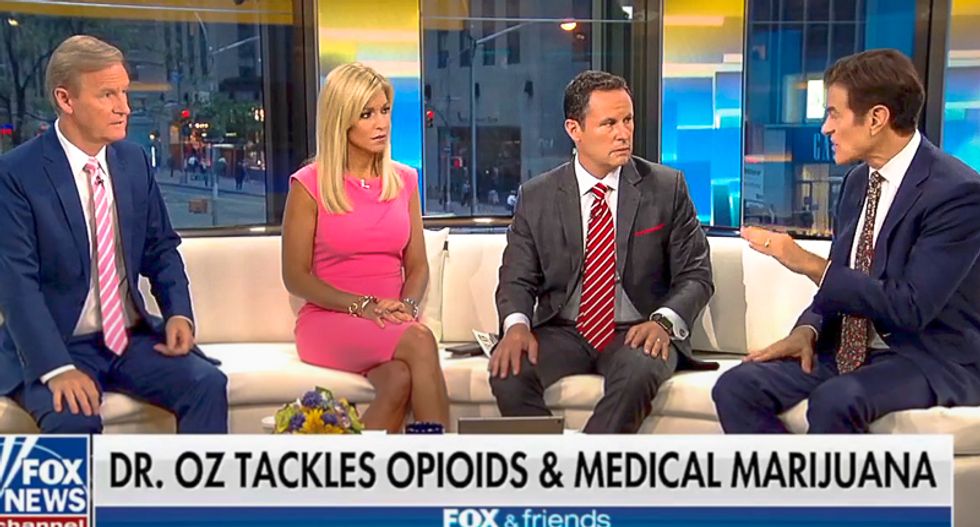 Mehmet Cengiz Öz, better known as TV host Dr. Oz, sat down with Fox & Friends to talk about an upcoming interview with Ivanka Trump -- but it was his unprompted support of medical marijuana that stole the show.

Fox News invited Oz on Tuesday to speak about how Ivanka Trump revealed on his show that she suffered from postpartum depression.

As the interview ended, Fox host Ainsley Earhardt asked the doctor if the anger over Donald Trump's presidency was bad for the country.

Dr. Oz agreed with Earhardt but then veered into a discussion about the opioid epidemic.

"Can I just say something," Oz asked as co-host Brian Kilmeade attempted to toss to commercial.

"The real story is the hypocrisy around medical marijuana," Oz said as the Fox & Friends hosts appeared stunned. "People say marijuana is a gateway drug to narcotics; it may be the exit drug to get us out of the narcotic epidemic."

"Wow!" exclaimed co-host Steve Doocy, who is known for mocking marijuana users with the phrase "all potted up."

"We're not allowed to study it because it's a Schedule I drug," Oz added. "And I personally believe it could help."

"I hadn't heard that before," Doocy gasped as he quickly ended the segment.