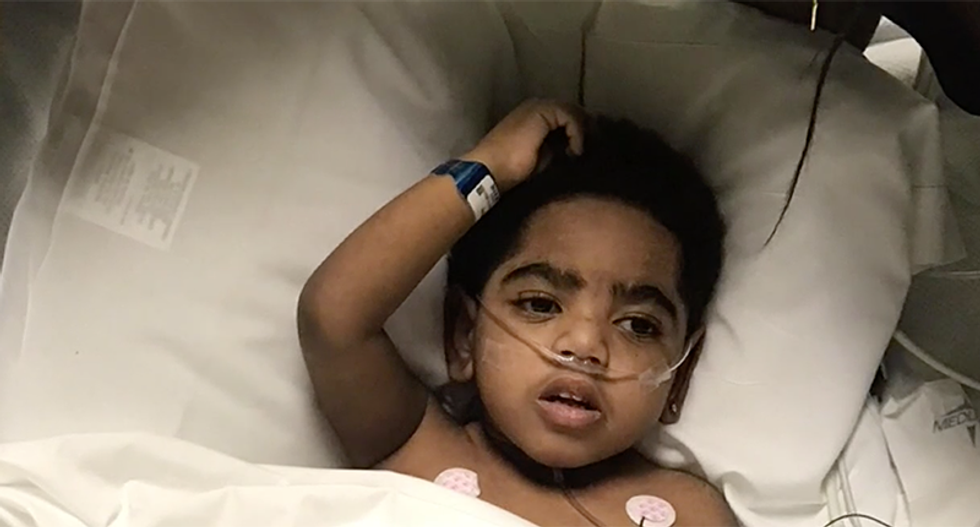 Two-year-old A.J. Burgess was rushed to the hospital over the weekend for treatment of an infection.

According to the Atlanta Journal-Constitution, A.J. has a peritonitis (abdominal) infection.

“He has been fighting for his life since the day he came into this world,” his mother said of her son, who was born without both of his kidneys.

A.J.'s story went viral when it was discovered that the boy's father is a 100 percent perfect match to donate his kidney. Everything was set to have the surgery, but his father, Anthony Dickerson, was taken into custody on a parole violation. Atlanta's Emory Health Center's language changed once it was found the boy's father violated his probation and was back in custody.

According to a letter Emory Hospital sent to the family, receiving his father's kidney depends on whether Dickerson can prove he has complied with his parole officer for three months. In the meantime, A.J. continues to fight for his life.

“Guidelines for organ transplantation are designed to maximize the chance of success for organ recipients and minimize risk for living donors,” Janet Christenbury, an Emory spokeswoman, said. “Because of privacy regulations and respect for patient confidentiality, we cannot share specific information about our patients.”

An official donation page has been sent up on behalf of the family to help with the ongoing costs.

"The family is asking for people of all faith traditions to be in prayer today for Baby AJ," said the family's attorney, Mawuli Davis. "His spirit is strong but his body is weakening."

Watch a local report below: