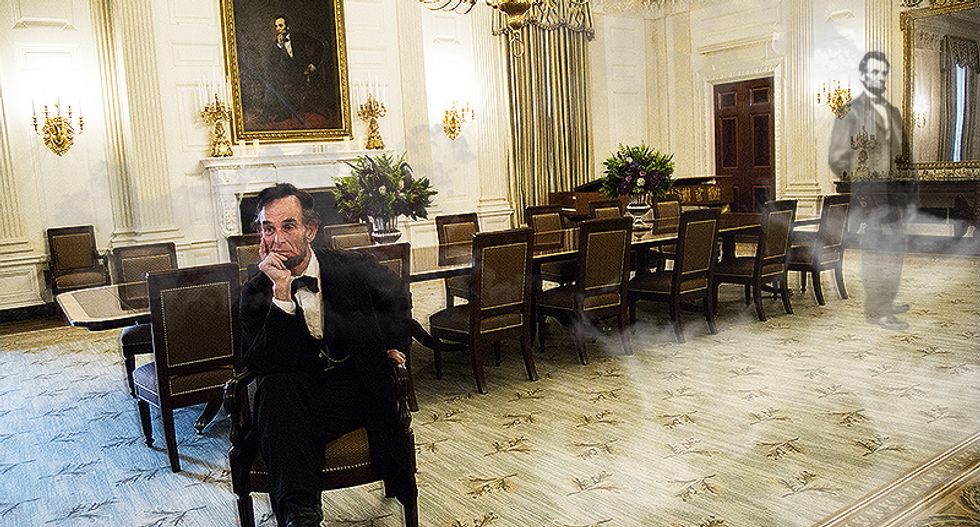 It may not have been a dark and stormy night with the bridges washed out when the first round of indictments were handed up by the grand jury Monday, still many politicos in Washington are scared. While the a stalled Congress, fearless special counsel and scandal-riddled cabinet might be terrifying to the Republican Party, there are many more creepy things that lurk around dark corners in the political town.

Here is a freaky list of seven spooky, gory or frightening things about the haunting halls of government that has nothing to do with President Donald Trump or politics:

1. Blood stains on the U.S. capitol steps and ghosts that roam the halls

While Trump might hate the press, one reporter is responsible for the death of the late Rep. Preson Taulbee (D-KY), The Cloture Club reports. In 1887, Taulbee was furious about salacious and scandalous reports about the Congressman being entangled with a love affair in the Patent Office. He grabbed Louisville Times reporter Charles Kincaid by the ear, ready to give him a sound talking to.

Kincaid, however, pulled his pistol from his coat and shot Taulbee, who died 11 days later. Taulbee's blood still stains the steps over 100 years later. Kincaid claimed self defense and was later acquitted of charges of murder.

The Cloture Club also has stories of statues mysteriously moving in the Capitol hall and the ghost of Vice President Henry Wilson, who died in his office after a bath he had built in the U.S. Senate. There are tales of Union soldiers, slaves who died building the Capitol, undead debates between Senators Daniel Webster and Henry Clay and the ghost of John Quincy Adams.

2. The haunted halls of the National Building Museum 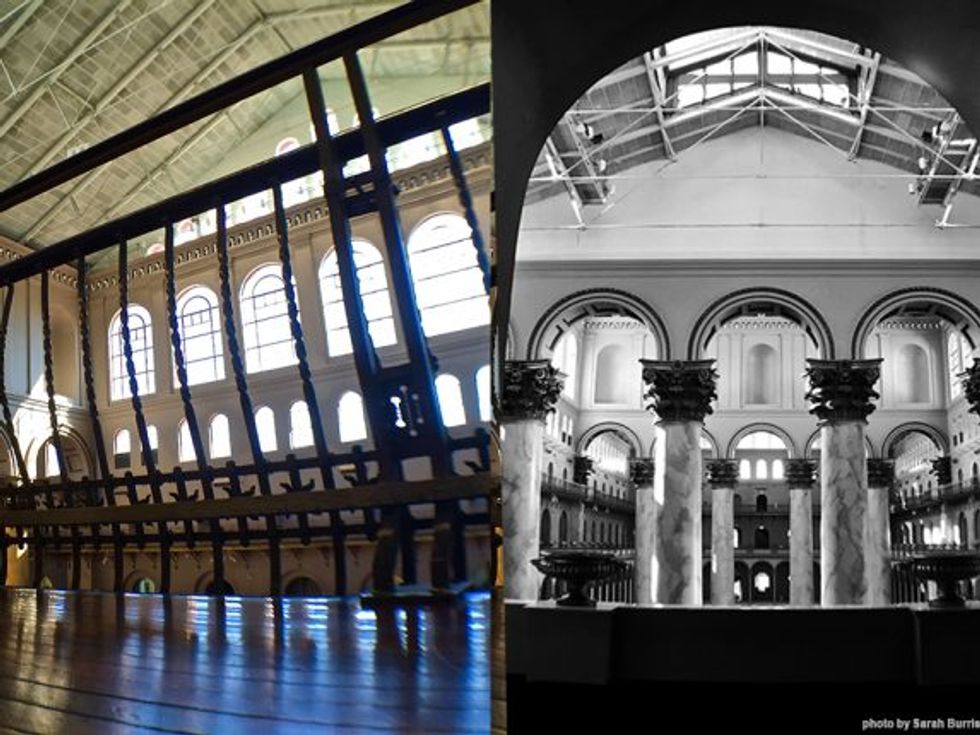 The same year Taulbee was shot and killed by a reporter, the Pensions Building was erected. Until the 1960's, federal offices sat on one side of the halls with the grand faux-marble columns that stretch to the fourth story. The building was marked for demolition and considered an eyesore, but according to the museum's site, conservationists fought to restore and preserve it as a historic landmark in 1985.

But under the cloak of darkness, the specter can appear. WTOP cited Capt. LaTanya Bullock of First Coast Security, who said there have been accounts of "strange noises and mysteriously misplaced objects,"

“Then I started getting calls in the middle of the night from frightened officers, saying they’d seen ‘a lady in white’ floating around the Great Hall. I thought they were losing their marbles until I saw the banshee myself,” she said.

The museum has also heard reports of a horse on the upper floors and the ghost of James Tanner, a court stenographer, who reportedly recorded the testimonies of those who saw the assassination of President Abraham Lincoln.

“The Museum’s ghosts were unavailable for comment at press time, but the marketing department has purchased a Ouija board with hopes of offering interviews in the coming weeks,” according to a release from the museum. 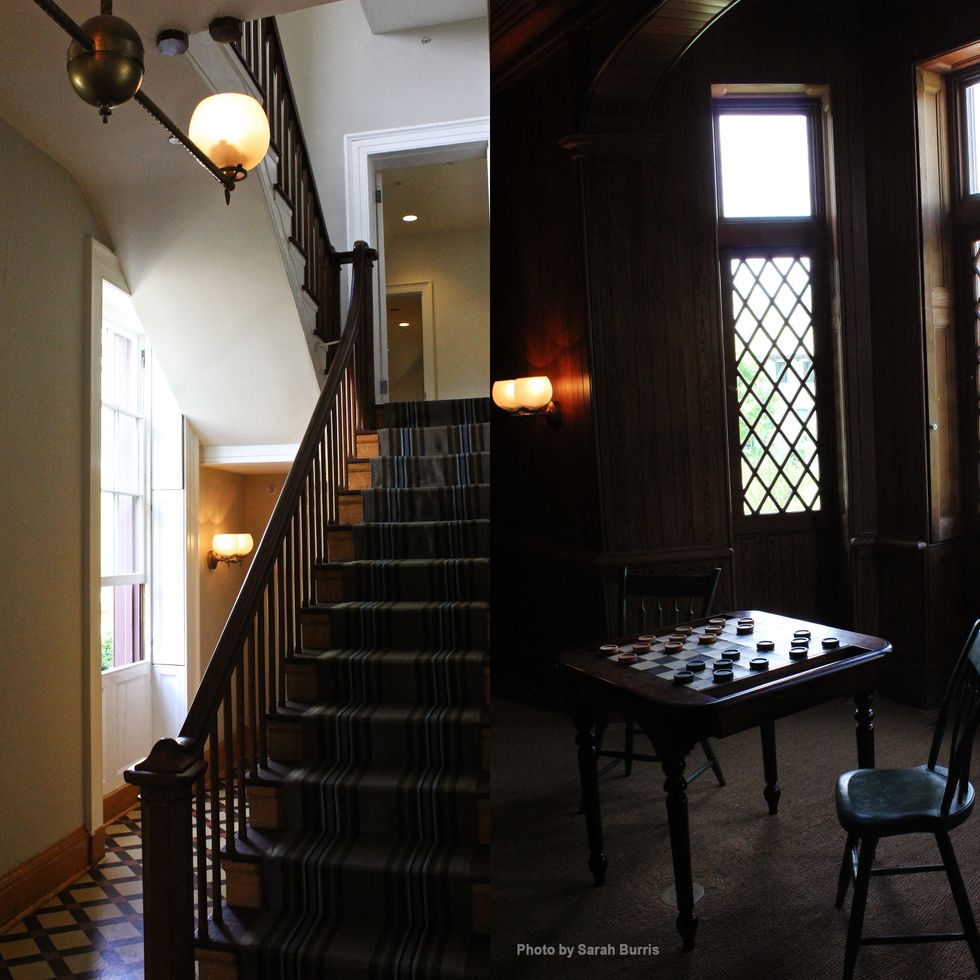 President Lincoln's cottage in northern Washington was surrounded by land which the commander-in-chief of the Union Military used to bury the soldiers of the Civil War. The land filled up so quickly, that the president declared eminent-domain, and took over Robert E. Lee's land in Virginia, which is now Arlington National Cemetery. In the meantime, imagine living in a house where the dead would lie and rot all around you.

The cottage is now a museum and event space, but like any old house, cracks in the settled walls and creaks in the old wood floors all make the sounds of the perfect ghost story. As the sun sets on the home, the shadows of Lincoln statues stretch across the yard. As the tourists empty the home, one can't help but feel the hair prickle on the back of the neck as an eerie silence encircles the grounds.

4. Old houses in Washington, D.C. almost certainly had dead bodies in them

While the remains of civil war soldiers might surround Lincoln's cottage, chances are the dead have sat in every home in the city built before the 1930's. It's no newsflash that old cities have a lot of history. Washington has seen wars, violent battles and truly horrific sanitation that may have been responsible for the deaths of three presidents.

But as Paul K. Williams, who serves as the President of Historic Congressional Cemetery wrote, the culture of the day was to hold funerals in the home. "Especially before modern funeral homes were licensed beginning in the 1930's," he explained.

5. The Walsh Mansion now the Embassy of Indonesia 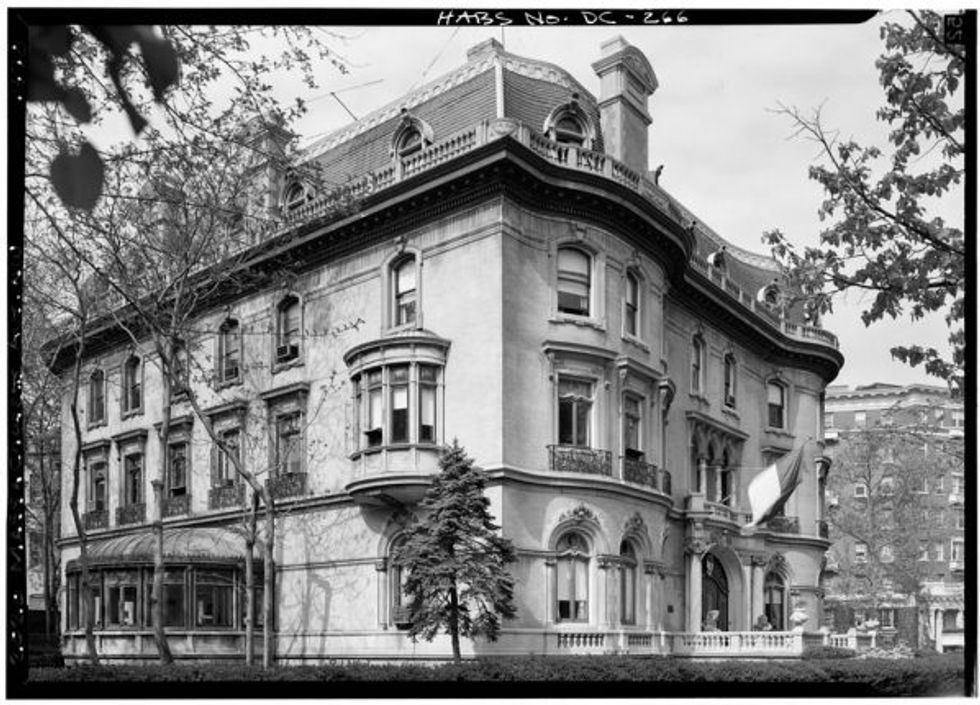 While the building is currently being used as an embassy, the old Walsh Mansion is one of Dupont Circle's most haunted places. The ghost is said to be the eponymous former owner Evelyn Walsh, Curbed reported, she was also was the last owner of the cursed Hope Diamond.

Thomas Walsh commissioned the house in 1903 for his daughter Evelyn, The Ghosts of DC wrote. The gold-mining magnate literally had a gold bar built into the archway over the front door and speckled gold into the marble throughout the home. Evelyn inherited the house, but was already living uptown with her husband, so she rented it out. One of the most famous tenants was the Red Cross, who she allowed to use it for free to make surgical dressing during World War II.

Yet, somehow, despite the gold, the home and her over 45 carat diamond, she died penniless and alone. "

It sparkled in the brow of an Indian temple idol — until it was impiously plucked out by a thieving Hindu priest, whose punishment for this unholy act was a slow and agonizing death," wrote Karl Shuker in The Unexplained of the massive diamond. King Louis XIV purchased it for Marie Antoinette in 1642. Both were beheaded and the diamond was stolen in 1792. Henry Thomas Hope acquired it and from there it exchanged many hands who are said to have committed suicide, were murdered, and left penniless through bad investments.

Evelyn is said to still walk the halls of the embassy, though it's unclear if her ghost wears the necklace.

6. The most haunted place in Washington: The Octagon House

Steps from the White house, stands a brick house of an irregular shape from the typical federal style of its day. Therein, former First Lady Dolley Madison is said to be wandering the premises, though she's not the only one.

"So numerous are the tales of death by tragic accident, suicide or murder, it is no wonder many sense restless spirits in nearly every room of the four-story building," claimed Washington Walks.

Ghosts include the daughter of the original owner, Col. Tayloe, who was in love with a British officer during the American Revolution. He father obviously forbade their relationship. She argued with her father at the top of the stairs and somehow fell to her death. Visitors report hearing screams and footsteps on the stairs, as well as strange cold spots in the house.

From the stories of the Lincoln bedroom to the ghosts of long-dead leaders, at least eight presidents and one British prime minister believed the White House to be haunted.

While staying at the White House, fearless Prime Minister Winston Churchill sat in a rocking chair smoking a cigar when he swore the apparition of President Lincoln appeared to him.

Good evening, Mr. President. You seem to have me at a disadvantage," he claimed he told the dead president. While Churchill seemed like one of the strongest leaders in history, he refused to sleep in the room ever again. Susan, the daughter of President Gerald Ford, also said that she turned a corner and ran into the ghost of Lincoln.

“I jumped up and put on my bathrobe, opened the door, and no one there,” he wrote. “Went out and looked up and down the hall, looked in your room and Margie’s. Still no one. Went back to bed after locking the doors and there were footsteps in your room whose door I’d left open. Jumped and looked and no one there! The damned place is haunted sure as shootin’. Secret Service said not even a watchman was up here at that hour.”

Rep. Liz Cheney (R-WY) was the organizer of an open letter by all living former Defense Secretaries against the military intervening in election disputes.

The revelation was made to Susan Glasser of The New Yorker by Eric Edelman, a friend of Cheney's who served as an advisor to her father.