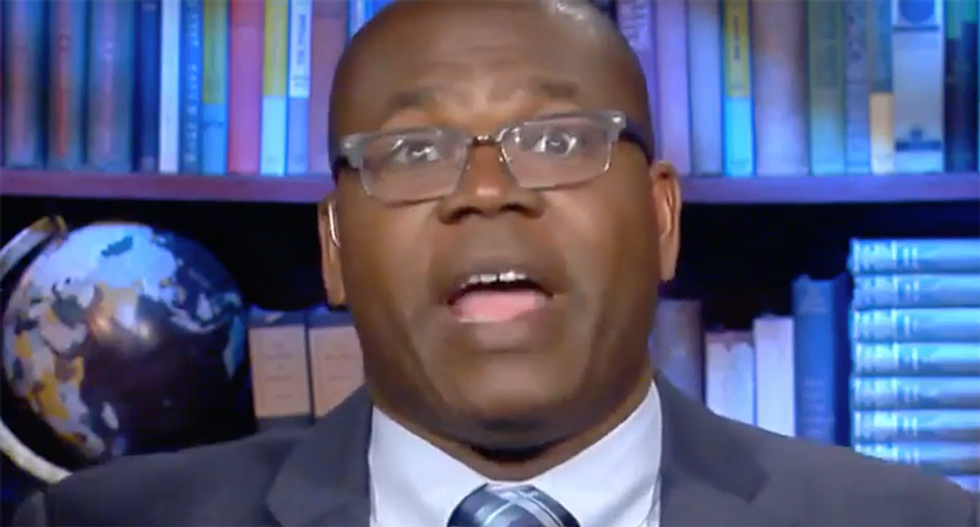 "Remember the only reason the Republicans and the Trump administration mentioned Chicago and Baltimore is black people, race," Dr. Jason Johnson said with a look of faux panic, while waving both hands frantically towards viewers.

"Let's talk about something else other than the issue that's important," Johnson said sarcastically, before dramatically shifting gears.

With graven seriousness, Prof. Johnson then countered claims by N.R.A. supporters that "now is not the time" to discuss gun control.

"Look, right now is the time that you have to actually talk about functional policy," Johnson explained. "If you see a car accident, that's when you should talk about safety belts. If your house burns down, that's when you talk about fire alarms. We should be talking about practical ways to prevent this from happening."

Now is not the time to throw up our hands and accept the possibility of "getting shot randomly when you go to a shopping mall," he said.

Johnson didn't just criticize Republicans and the Trump administration, he also said part of the problem is "the refusal on the part of some advocates for gun control" to effectively call out the N.R.A. and say "the other side is lying, the other side is being disingenuous, the other side is trying to avoid the issue, they want to talk about everything else other than the fact that you have too many people in this country who have dangerous guns and that poses a threat to all of us."