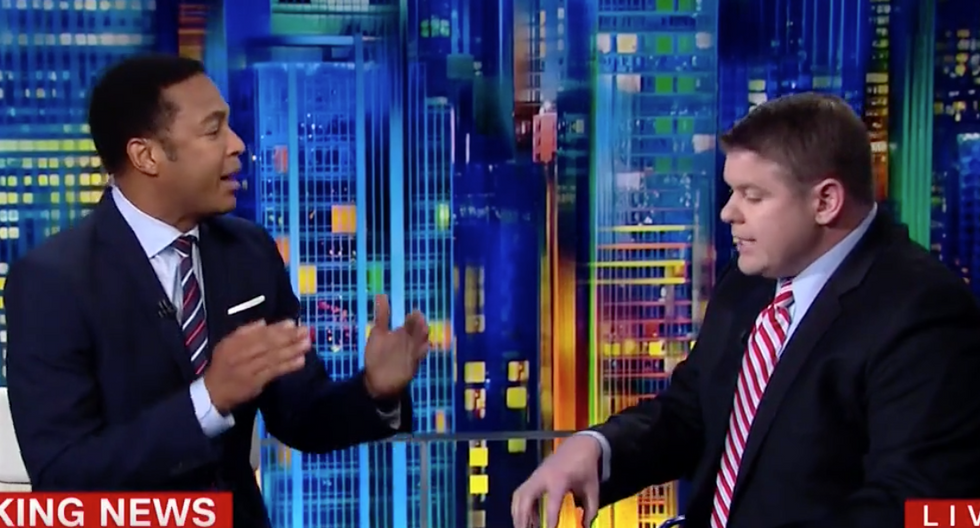 CNN’s Don Lemon in Wednesday smacked down Ben Ferguson as the conservative commentator tried to corner the host over the “appropriate” way to honor the American flag.

The pair were discussing Donald Trump’s continued attacks on the NFL, which the president resurrected during an interview with Fox News’ Sean Hannity on Wednesday. Ferguson tired to argue former 49ers quarterback Colin Kaepernick is a “becoming a hypocrite on this issue” because of the way he’s carrying out his protest against racism in the United States.

“Who is to say which way you should protest is fitting?” Lemon asked. “It wasn't even a protest on the flag until the president made it that issue.”

Lemon noted Kaepernick even spoke with a veteran on the most respectful way to protest during the national anthem, and wondered why Trump can’t acknowledge that he represents all Americans and “come to some sort of agreement about it.”

“These players flat out show disrespect for the flag,” Ferguson retorted.

“It wasn't seen that way until the president made it into an issue,” Lemon explained, before explaining now players are taking issue with Trump “telling [them] how to be an American.”

“Why are you forcing patriotism on somebody?” Lemon asked.

Ferguson replied Trump has “an obligation” to “protect and defend the honor, the integrity of the flag, the national anthem” as president.

“The flag and the national anthem and what this country was built on, the people who fought and died for you to be able to protest in whatever way you want to,” Lemon replied.

Lemon asked what the purpose of playing the national anthem at public sporting events even is, prompting Ferguson to go off on how “it's to honor the the United States of America.”

“You're giving some bull crap answer,” Lemon interjected. “Your answer is bull, it's not true.”

“You’re smarter than this,” Ferguson tried to say, prompting Lemon to go off.