Californians terrified as evacuation routes are blocked by raging wildfires: 'Looks like Armageddon' 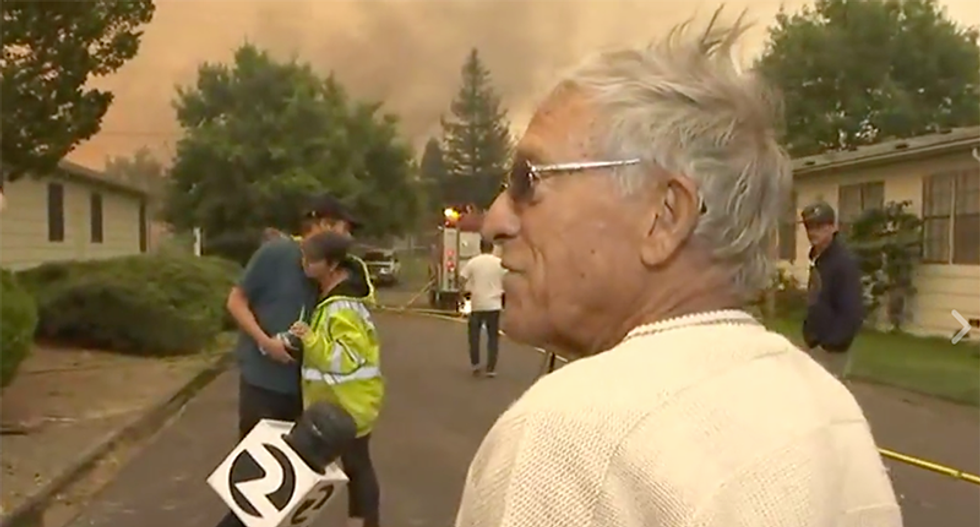 Northern California is burning and the fires are spreading quicker than people can be evacuated. Now it seems evacuation routes might be blocked and people are starting to panic.

Napa and Sonoma Counties have a 200-acre wildfire that has been raging throughout the night as residents slept. By 3:00 a.m. PST, the National Weather Service showed at least six fires north of the Bay Area and a new fire starting east of Cloverdale, KTVU reported.

"HELP! If anyone can see open roads from Glen Ellen to SF please tell," tweeted a desperate Taylor Humphreys. She explained that her family was stuck and blocked by roads. "No news sources are confirming open roads. People are trapped."

She explained to Raw Story that she wasn't trapped but her father was trying to figure out how to get out.

Jake Palmgren tweeted an alarming photo of the fire creeping over a hill at Madrone Rd and California Highway 12. He said that Trinity Road was on fire and the roads are closed. The only way out is to go north.

Grant Heinlein‏ is worried because he can't get ahold of his parents where were staying at the Calistoga Ranch, a luxury resort a few hours north of San Francisco. Sonoma Magazine food and wine writer Sarah Stierch explained that the power is out in the area.

According to Stierch, the Nicholson Ranch and Winery has already been destroyed as has the Fremont Diner. She posted screen captures from Sky 7 News, who overlaid the roads to show the wire the smoke and fire has completely engulfed them.

Will and Carolyn Spence narrowly escaped with just the clothes on their back, their medication and their dog Blackey.

"People are running red lights, there is chaos ensuing," said Ron Dodds, who raced to rescue his uncle. "It's a scary time. It looks like Armageddon."

One retired firefighter explained that he was only able to grab a few old photos of family before he could escape. "The fire just jumped," he said, saying it seemed like it was at the distance and then it was at his door.

You can watch KTVU broadcasting live below: