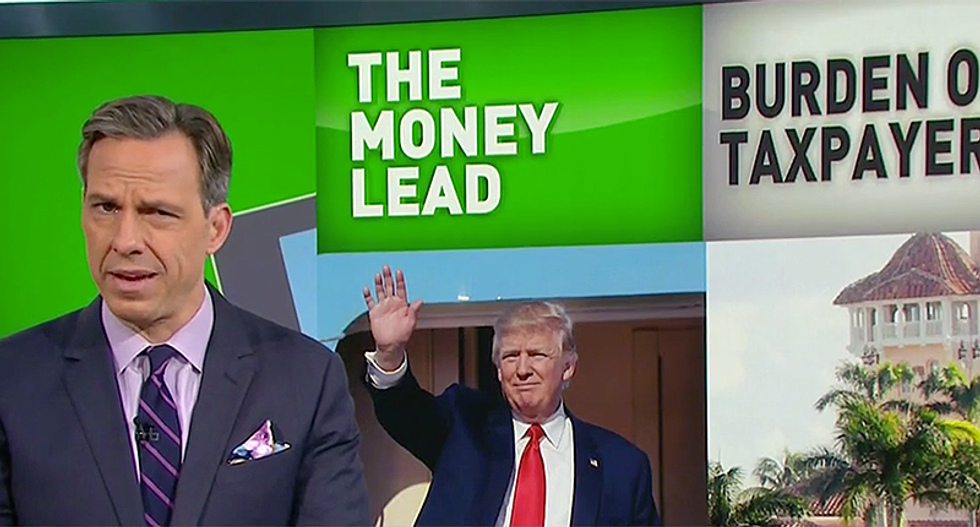 CNN Money uncovered that the U.S. Secret Service has been forced to pay over $63,000 to stay at Mar-a-Lago while protecting President Donald Trump for just a few months.

This is the "rack rate," according to reporter Cristina Alesci, who spoke to Tapper Thursday. The agents weren't given a government rate or any kind of "deal" since they were forced to be there to do their job. As a result, Trump is directly profiting off of his position and those tax dollars are flowing directly into his pocket.

Tapper noted to his political panel that it "boggles the mind," how it's been able to happen.

The report revealed that the majority of the money spent was between February and April, and classified as hotel costs on government expense forms. An August report from USA Today cited the budget of the Secret Service and sources claimed that they were "tapped out" because of the lavish costs of the Trump administration.

The payments are detailed in forms and more than a dozen invoices on Mar-a-Lago letterhead ranging from $1,300 to $11,050.

According to Trump's financial disclosure forms, Mar-a-Lago made $37 million in revenue between January 2016 and April 2017, CNN Money reported. After Trump was inaugurated, his club raised the membership fee to $200,000, up from $100,000 the previous year. Government ethics experts warn international leaders and lobbyists can now buy access to the president through his properties.

Thus far, Trump has spent 42 days at his club.

"Government ethics hawks argue that the flow of money to Trump is inappropriate," she said. "In fact the former director of the chief's ethics agency says the president should stop visiting his properties altogether."

"I'm telling you right now, stop going to your properties," Walter Shaub told CNN. "Tell the White House officials not to go to those properties."

Watch the Tapper commentary below and read the full report at CNN Money:

Jake calls out Trump for trying to 'make as... by sarahburris