Ricky Gervais can't understand Trump's duped supporters: 'Why are they falling for drain the swamp?' 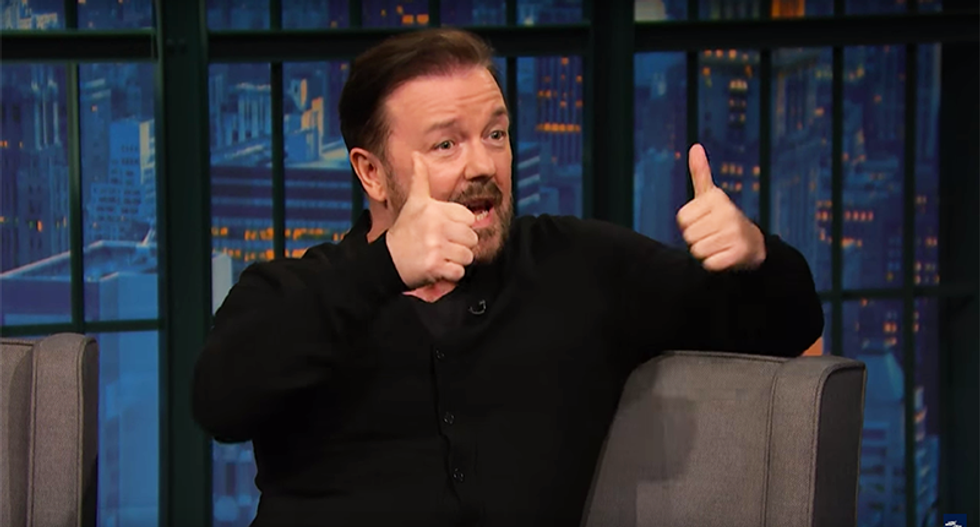 Comedian Ricky Gervais opened up in an honest and philosophical interview promoting his tour of 120 cities called "Humanity" in the United States. He's also launching his "Deadly Sirius" show on SiriusXM Tuesday, with longform interviews with everyone from philosophers to musicians to political commentators.

“You know that thing about how comedy is tragedy plus time?” he told The Daily Beast. “That doesn’t stop you from thinking of the joke during the tragedy.”

It's Gervais' first stand-up tour in seven years and he admitted he knew the world seems to be in the "epicenter of the storm" but he's already thinking about how we'll ultimately be laughing about this one day "and we won't be dead."

His goal of the tour is to expose the audience's' own prejudices and privileges. He's been quick to slam President Donald Trump over the last year, yet the tour won't focus on politics or news. Instead, he talks about famine, AIDS, cancer and Hitler.

He thinks the politically correct culture created the problem.

Gervais said that the fallout from Harvey Weinstein and how man like him perpetuated the cycle of complacency by not coming forward. He brought up Mel Gibson's use of the phrase "sugar t*ts" when speaking to a police officer. In the video, Gibson then turns to his ex to tell her that she deserves to be raped. He noted it hasn't even been a decade since it happened. He's knocked Gibson during the Golden Globes in the past, with shocked gasps from the audience. He said that it illustrates the hypocrisy of the film industry.

The first time Gervais did the Golden Globes he said that he could feel the audience wondering “Why is he saying awful things about these exceedingly rich, handsome, privileged people?” He told The Beast that he wanted to tell them to "get a grip," in part, because he see's a comedian's job as the boy in the crowd pointing at the king and telling him he's naked. He wanted to make it a spectator sport.

People say that there are always things you can't say or shouldn't joke about, but Gervais said that as long as it is accurate and fair, no subject should be off limits. Hollywood is no different than the presidency or banks selling gold. He did admit that he waited a bit before going after Mel Gibson's anti-Semitism.

"I did that the next time. It was gentle ribbing," he said. "I did a joke about the film Spotlight, the one about the pedophile priests. I said “Spotlight: loads of acclaim, including Roman Polanksi called it the perfect date movie.” I could tell from the gasps. He joked about Roman Polanski! Why not? I’m not having a go at his directing. One person said to me how dare you go after Mel Gibson? Mel Gibson is the director of Braveheart. No, I love that film. Wasn’t having a go at his directing."

He hopes that he can find something good within all of the horrific news, but then again, he said that he finds the good in everything. He hopes it'll be a wake-up call, particularly after Brexit.

"The next vote we had, young people voted more than they ever did before because they suddenly thought, f*cking hell, this is important now," he said. "Ironically, he’s sort of given the world a kick up the ass. Obviously we’ve got to end this madness before the world is destroyed. I like the Nietzsche thing about how everything that doesn’t kill you makes you stronger. We just have got to make sure this thing doesn’t kill us, and I think we’ll be stronger."

His "Deadly Sirius" show begins Tuesday, but it won't be a daily radio show and he'll be doing it from anywhere. He'll pre-record episodes and save them to distribute 10 over the next year. It will also be available via podcast.

Read the full interview at The Daily Beast.