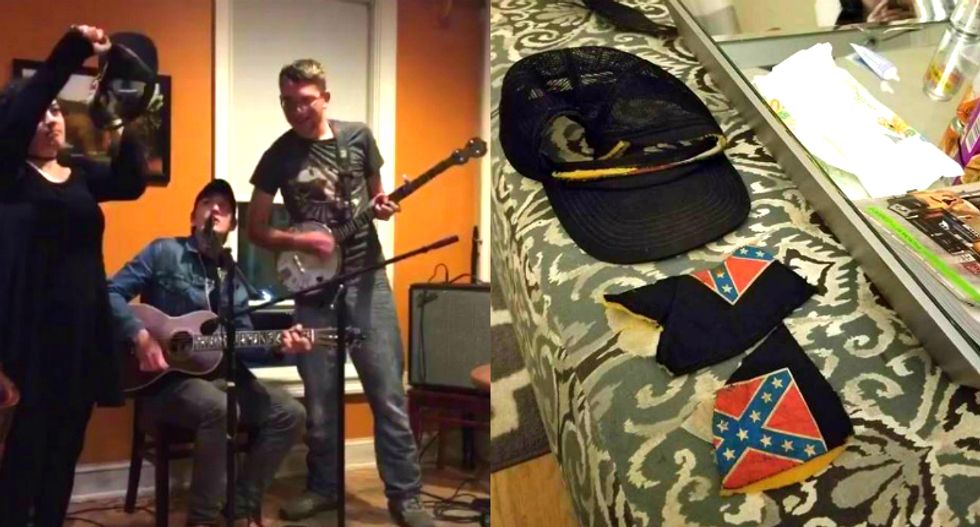 An employee at Molten Java cutting a Confederate hat (left) and the aftermath (right). Images via Facebook and Twitter.

Last week, an employee at a coffee shop in Bethel, Connecticut took a Confederate flag hat belonging to a performer at an open mic night and tore it up in front of an audience while he played the banjo.

According to Danbury, CT's News Times, the police were called and some threatened to boycott the Molten Java cafe where the incident took place.

But as soon as right-wingers online got a hold of it, all hell broke loose.

"One Molten Java coffee shop employee apparently couldn’t take the sight of a Confederate flag baseball cap inside the Bethel, Connecticut, coffee shop any longer," read the lede to an article posted on The Blaze, owned by former Fox News host Glenn Beck, about the incident.

According to the right-wing Blunt Force Truth blog, the employee used "a knife to slash [the hat] to pieces on stage."

"People actually act like this in public," wrote blogger Danielle Jackson at the conspiracy theory-peddling Project Republic Today. "And that is scary."

It was even picked up by Breitbart News Daily's Facebook page, which linked to the original News Times article and described the employee's "angry reaction" to the hat.