Conway unhinged after indictment: Trump 'focused on other things' -- and his six Russia tweets prove it 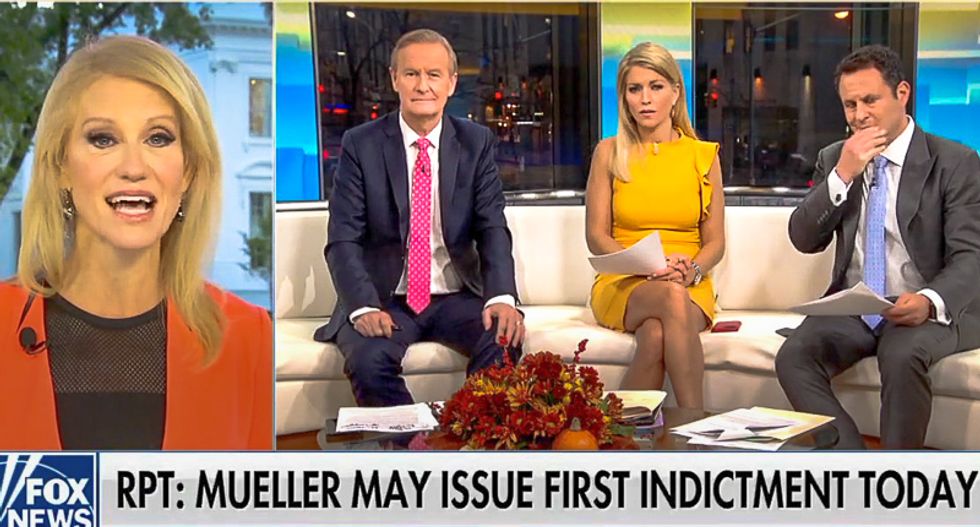 White House counselor to the president Kellyanne Conway insisted on Monday that President Donald Trump was "focused on other things" on the same day that his former campaign manager, Paul Manafort, was reportedly indicted by Special Counsel Robert Mueller.

During an interview on Fox & Friends, Conway was asked about the news that Mueller had issued indictments in the investigation into Russia's interference in the 2016 U.S. presidential campaign.

"As the president has said, everyone is fully cooperating with these investigations," Conway insisted. "But the president has also made clear as recently as this weekend that he considers this a hoax and that people should be looking into campaign coordination, if not collusion, between the Clinton campaign, the DNC, this Russian dossier."

After a two-minute rant about the former Democratic nominee, Conway announced: "We would be glad to stop talking about Hillary Clinton and the campaign, we dispensed with her a year ago. But she just won't go away."

According to Conway, the Russia investigation is not even on the president's mind -- even though he tweeted about it six times in a row on Monday.

"The president is very focused on other things," she opined. "What he said yesterday in his tweets is no different than what he said all along."

"I just want to tell you that the president continues to focus on what matters to people," Conway added.