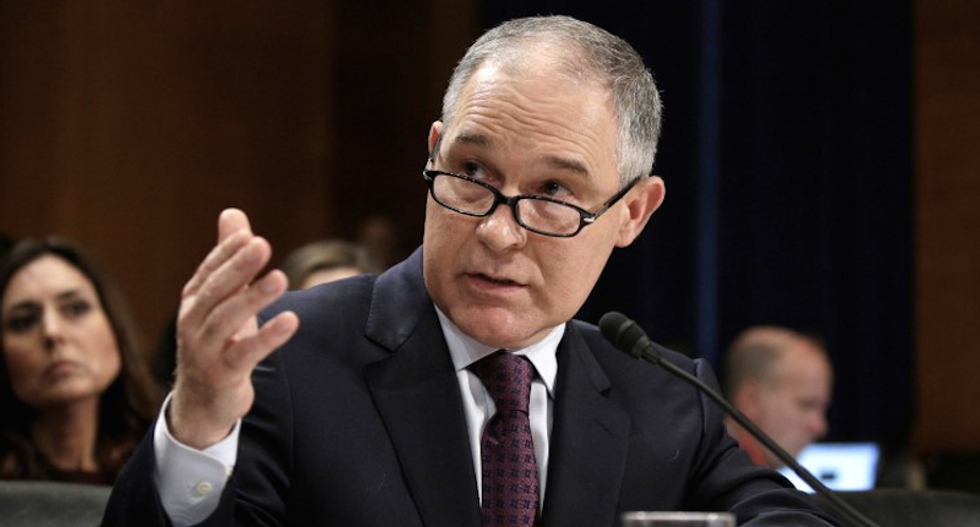 Oklahoma Attorney General Scott Pruitt testifies before a Senate Environment and Public Works Committee confirmation hearing on his nomination to be administrator of the Environmental Protection Agency in Washington, U.S., January 18, 2017. (REUTERS/Joshua Roberts)

The U.S. Environmental Protection Agency will cut response times to permit requests to within six months by the end of 2018, part of the agency's goal to reduce regulations and delays, Administrator Scott Pruitt said on Thursday.

The move comes as President Donald Trump pushes to shrink the size of government and cut regulations, especially on the coal and oil sectors.

The EPA has in some cases taken several years to review some permit requests. Pruitt said cutting that response time was a key goal when he took office earlier this year, a task he delegated to Henry Darwin, his chief of staff and a former staffer at the Arizona Department of Environmental Quality.

"It can be done. It's just a matter of having the process in place to achieve results," said Pruitt, the former Oklahoma attorney general.

Environmentalists have consistently challenged Pruitt's decisions atop the EPA, saying the agency is rushing approval of some projects that could harm the environment.

In his remarks to the crowd of oil and gas executives, Pruitt said he did not see his role as having to chose between the economy or environmental stewardship.

"One of the greatest challenges we have as a country is to ask the question, 'What is true environmentalism?'" Pruitt said. "Why can't we be about jobs and growth and environmental stewardship?"

Earlier this month Pruitt issued a notice that the agency intended to repeal the Clean Power Plan, which it said relied on controversial calculations of economic costs and benefits. Ending the rule could save $33 billion in regulatory costs, the EPA estimated.

Pruitt said he did not believe the EPA had the authority to regulate how electricity is generated under the Clean Air Act, , although former President Barack Obama's administration had taken the opposite approach.

The U.S. Congress, Pruitt said, should tell him how to proceed, vowing to take no action on the issue without legislative approval.

"If Congress hasn't given us the authority to do something, we can't do it," he said. "If they want to give us authority to regulate certain areas, they need to be specific and tell us."