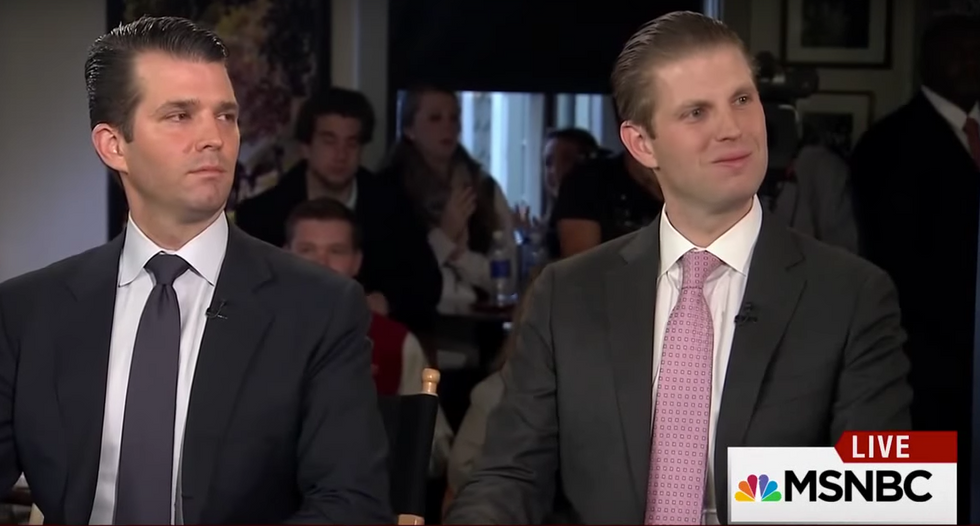 The Trump brothers, Eric and Donald Jr. are investing in luxury resorts on one of the poorest corners in America as part of a program they're calling an “American Idea.”

The actual "American Idea" is that the Trump Organization will be reopening two Comfort Inns and Rodeway Inns, but will bring them up to "Trump standards," according to The Washington Post.

"It is nearly unheard of for a national hotel company to debut hotel lines in one of America’s poorest corners, surrounded by cotton and soybean fields and lacking a commercial airport or even an easily accessed interstate," The Post wrote of the 100-room Scion hotel.

Amid those cotton fields will rise the Trump Organization's project designed like an "antebellum plantation" in towns near Cleveland, Mississippi. The town population is just barely over 12,000 people with a majority African-American citizenry. Located in the Mississippi Delta, it's being pitched as a place where The blues can be celebrated. "A plan that some black residents view as Trump’s effort to monetize the threadbare music invented by slaves in the Mississippi cotton fields."

The city also lists 53.3 percent of children there are living in poverty and 2015 census data shows 59 percent of households make less than $35,000 a year. To make matters worse, the closer of factories during the recession have left citizens desperate for work.

“It shows he really doesn’t have a conscience. It’s about money,” Rep. Bennie Thompson (D-MS) told The Post.

But, people in the depressed economic area are desperate for jobs. Ellis Turnage, a local attorney representing the town's black residents in a voting rights lawsuit, said that it will put residents in the position of choosing between their politics and their economic need.

“People are looking for something that’s going to raise Mississippi up off the bottom,” he explained.

He said that not one person in the area would admit to voting for President Donald Trump in the election, but the town is desperate for more economic investment.

Mississippi is desperately trying to attract tourism to a state known for being last in economic and education markers for success. They're capitalizing on their best asset: it's the birthplace of blues music. Museums and clubs have popped up on Highway 61, known as “the Blues Highway.” The local economy scored a massive $20 million economic boost last year when it opened a Grammy museum in Cleveland that focused on blues players like B.B. King and John Lee Hooker. So, the town needs hotels.

During the 2016 campaign, Donald Jr. met with the Chawla sons at a GOP fundraiser in Jackson, Mississippi. Suresh Chawla donated $50,000 to GOP candidates as well as $27,700 to the Trump campaign. Trump's CEO of hotels, Eric Danziger, suddenly began considering the Cleveland project for their first Scion. The Trump brothers met with the Chawlas in June to announce the project.

Since then, the press has been highlighting failed development projects like the Trump Farallon Estates at Cap Cana, in the Dominican Republic.

“We are very hesitant to work with reporters at this point — everything we say, explain, do — is taken out of context,” Dinesh Chawla told The Post. “It’s frustrating that we seem to be used as pawns in a game.”

There's a concern that the black community won't be willing to spend money in the Trump-owned hotels given accusations of racism surrounding the NFL player protests, Charlottesville, attacks on Rep. Frederica Wilson and history of propping up white supremacists.

“I think if the Trumps’ bottom-line profits for a hotel in the Mississippi Delta are predicated on black people coming and spending money, I think they are in serious trouble,” said Rep. Thompson.