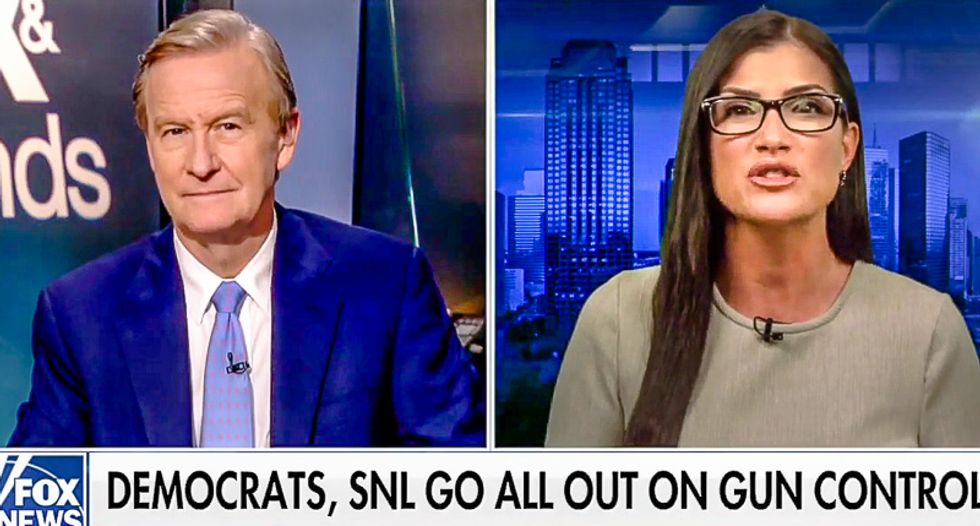 NRA spokesperson Dana Loesch slammed celebrities on Monday for using their First Amendment rights to speak out against guns after the recent mass shooting in Las Vegas.

During an appearance on Fox & Friends, Loesch accused Saturday Night Live comedians of being hypocrites after the show came out in favor of gun safety laws over the weekend.

"I'm not going to take any kind of firearm lecture from people who clearly don't either own them or have never even fired them," Loesch complained. "And don't even understand the concept of self defense either."

Fox News host Steve Doocy noted that many gun control proponents have expressed outrage at the number of guns owned by the Vegas shooter.

"Something I would ask them is, what is the correct number of guns?" Doocy quipped. "I haven't heard anyone say an American should only have blank number of guns or one gun or no guns. Actually, I've heard a lot of people say no guns."

The idea of banning guns appeared to enrage Loesch.

"I'm curious to see how they would propose that to work because you would need firearms to go door-to-door in houses all over the United States to millions of Americans and confiscate said firearms," she opined. "To that point, there are millions of Americans all throughout the country -- some of them, yes, even own 40 firearms. And you know what? They've been owning these 40 firearms for decades!"

"They have the luxury of being able to tell everyone else to disarm because it's class warfare," she stated. "These individuals can afford private security. They work in a building with armed guards. And you know they wouldn't go one single day without those armed guards."

"Why don't you give up the firarms that your private security is holding!" Loesch shouted. "You're not being more virtuous because you're paying someone else to carry it. You're outsourcing it because you lack the courage of your own convictions!"

In an op-ed published at the Wall Street Journal this Tuesday, former GOP senator Phil Gramm and current GOP Senator Pat Toomey argue that former President Donald Trump's "protectionist agenda" was a major failure, which "reduced economic growth" and played a role in his loss of Pennsylvania, Michigan, and Wisconsin during the 2020 election.

Trump regularly praised himself for imposing tariffs, particularly on China. But according to Gramm and Toomey, his tariffs were ultimately counterproductive.