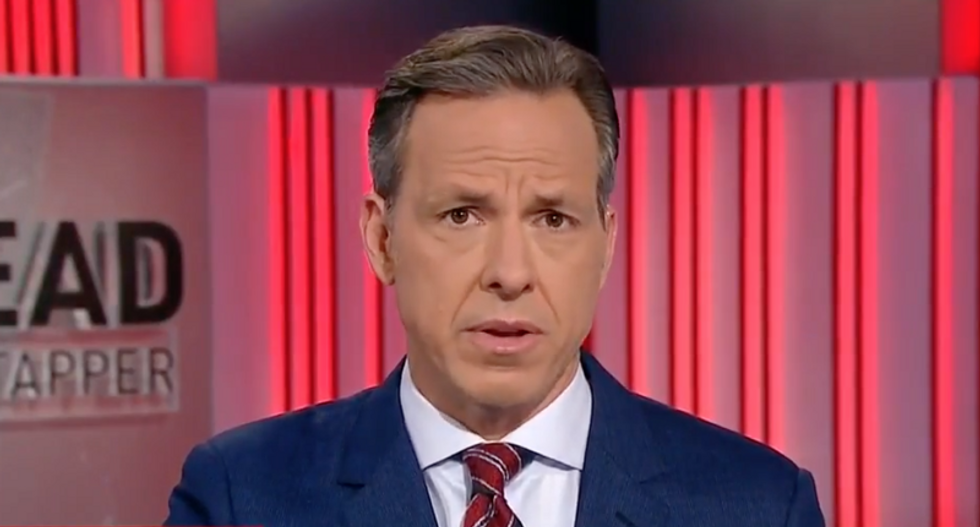 Though we may not know what exactly President Donald Trump said to the grieving widow of La David Johnson, but whatever it was, CNN's Jake Tapper noted, it reportedly caused her to "break down after the call ended."

"The problem that President Trump might have here," the CNN host argued on Wednesday, "is that when it comes to sensitivity...about service and sacrifice specifically, he's already made what critics have assessed to be some grievously bad decisions."

Tapper detailed Trump's many attacks on military families: his comments claiming he likes "people who weren't captured" referencing Sen. John McCain; his rhetoric after the Muslim parents of a Gold Star fallen soldier after they spoke against his Islamophobia last year; and his speech at the CIA the day after he was sworn in where he bragged about the size of his inauguration in front of the agency's Memorial Wall.

"Amidst all this ham-handedness, the president this week falsely accused President Obama and previous presidents of never having phoned Gold Star families," Tapper continued, "in an apparent attempt to make himself look more attentive and compassionate, I suppose."

As the host noted, the scandal surrounding Trump's comments to Johnson's widow, "this most personal and horrific experience, is just one more piece of ammunition in the snark wars where nothing matters anymore except for scoring points."

Instead, he argued, "all of us need to consider the unimaginable [pain] these families go through when we speak to them and speak of them."

"If you don't take great care, and, in fact, if you're reckless about these kind office sacrifices," he concluded, "well, then people not be willing to give you the benefit of the doubt if on one occasion your words come out wrong."