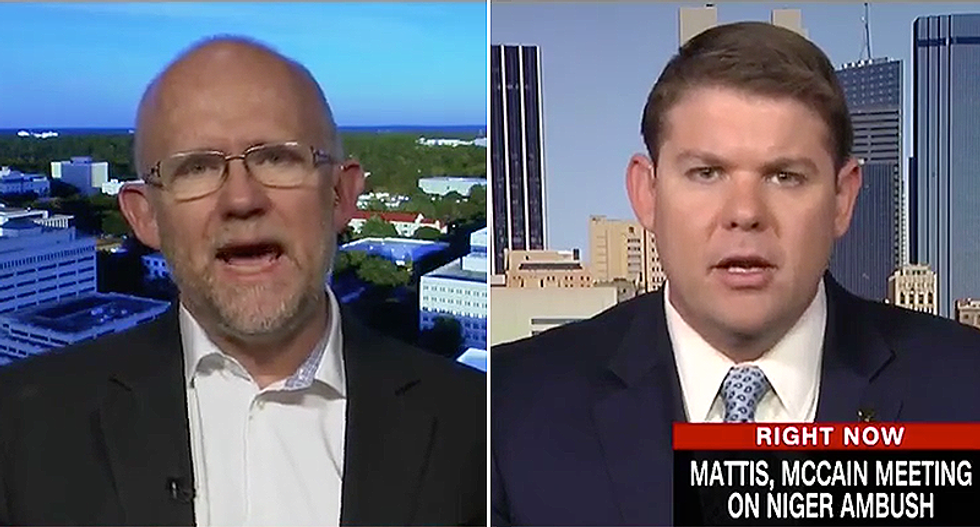 Republican political commentator Rick Wilson and right-wing radio host Ben Ferguson got into a heated discussion on CNN Friday, while President Donald Trump's surrogate attempted to blame the left for not taking the high road.

Ferguson began by saying that if Rep. Frederica Wilson (D-FL) had a problem with the president that she should have reached out to him personally instead of taking it public. The same could be said for Trump, who has had his White House working to discredit Wilson for several days as he rages on Twitter about her.

CNN host Brianna Keilar wondered how you take the high road when the president refuses to stop tweeting about it, while Wilson said that universally everyone agrees that there is a family here that everyone should be sensitive about.

"My difficulty with today was not just that the president extended the pain and kept the political fight going, but he did it in a way that was typical Donald Trump. It was me, me, me!" Wilson explained. "I'm the winner, I'm going to politicize this even further now."

He went on to say that Trump's morning tweet "besmirched" the remarks Gen. John Kelly made the day before. He explained that if there was a smart White House that cared about people, they would have shut it down and refused to say more other than to offer peace and solace. Sarah Huckabee Sanders, went out and furthered the problem. "They get in a hole and can't stop digging," Wilson continued.

Ferguson cut in to say that the president is on one side while a Congresswomen is going public, but Wilson cut in to quip "then you keep it going for three more days? Is that the mature thing to do? Man thing to do?"

Ferguson said that Trump was simply correcting the record that he didn't say anything insensitive. Though the family refutes that.

Ferguson protested but Wilson persisted, saying that it was Trump who was "dragging this out," when "he could have easily stopped it."