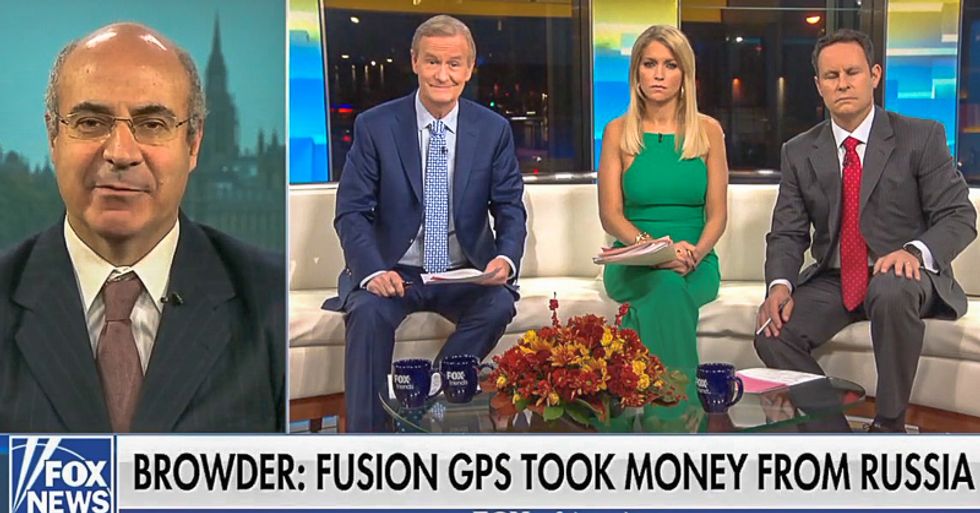 A Fox News guest on Thursday pushed back against host Steve Doocy's assertion that Fusion GPS, a research firm that compiled a trove of information connecting Donald Trump's campaign to Russia, was in the "fake dossier business."

During a Fox & Friends segment that posited Fusion GPS' so-called Steele Dossier was funded by Russia, author Bill Browder said that he had uncovered evidence to back up the claim.

But as the segment progressed, Browder diverged from the Fox & Friends talking points.

Co-host Brian Kilmeade asked Browder: "What objective did the Russians have in our elections last year besides creating chaos? Did they really have an animus towards Hillary [Clinton]? Did they really prefer for Trump?"

Browder explained that the Russians preferred any candidate who would do their bidding, and that President Vladimir Putin targeted the Trump campaign in an attempt to repeal the Magnitsky Act, an American law that has the power to seize the Russian president's vast wealth.

"He's probably the richest man in the world and his money can potentially be seized under the Magnitsky sanctions," Browder said.

According to Browder, Donald Trump Jr.'s meeting with a Russian lawyer during the 2016 campaign was likely sanctioned by Putin.

"We know for sure that through this [Russian lawyer], people running all over Capitol Hill, we know they went to Trump Tower," he observed. "And I'm sure they would have gone to -- Putin is a non-partisan criminal. He will go to anybody who will do his bidding for him."

Doocy noted that a previous guest had accused Fusion GPS of creating "fake dossiers", like the one with damaging information about Trump.

"He said they're in the business of just making up fake dossiers to slime people," Doocy opined. "Do you find it extraordinary that the FBI might look at the [Trump] dossier and say -- even though it is widely known that they are apparently in that fake dossier business -- the FBI will look at it and say, 'Hey, yeah, this is good stuff. We should go ahead an investigate this!'"

Browder, however, did not give Doocy the answer he was looking for.

"The FBI is full of very smart people," Browder remarked. "I'm sure that they can separate bullshit -- excuse me -- bad stuff from good stuff."