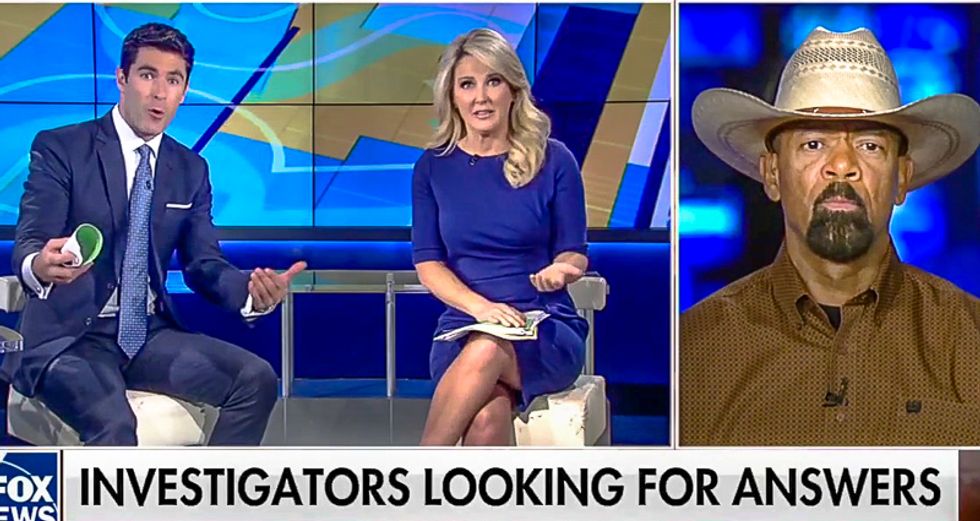 Former Milwaukee County Sheriff David Clarke on Tuesday defended the Las Vegas shooter Stephen Paddock's right to own dozens of firearms but admitted that one preferred Republican solution to mass shootings -- see something, say something -- has failed.

During an interview with Fox & Friends First on Monday, host Rob Schmitt noted that "the firearms this gentleman [suspected shooter] owns were legal, there were 23 found in the hotel room, another 19 at his home and that is what we know so far."

But Clarke slammed the "see something, say something" campaign, which was heavily pushed by the Bush administration following the terrorist attacks of Sept. 11, 2001.

"I think it needs to be re-evaluated," Clarke opined. "Because one of the most effective things we can do to detect, prevent and disrupt these sorts of investigations is to involve the public."

Clarke, however, dismissed the idea of tightening gun safety laws.

"We try to point to and try to find the technical aspects of this," Clarke complained. "One handgun with 50 magazines is still going to be able to do that same amount of damage -- maybe not in the period of time that he needed."

"And that's a tricky thing in this sort of situation because there are over 300 million guns in the United States. We're not going to know where all of them are. Some people have multiple guns," Clarke concluded. "The ordinary gun owner would never dream of a nightmare of taking that firearm and committing this type of carnage."