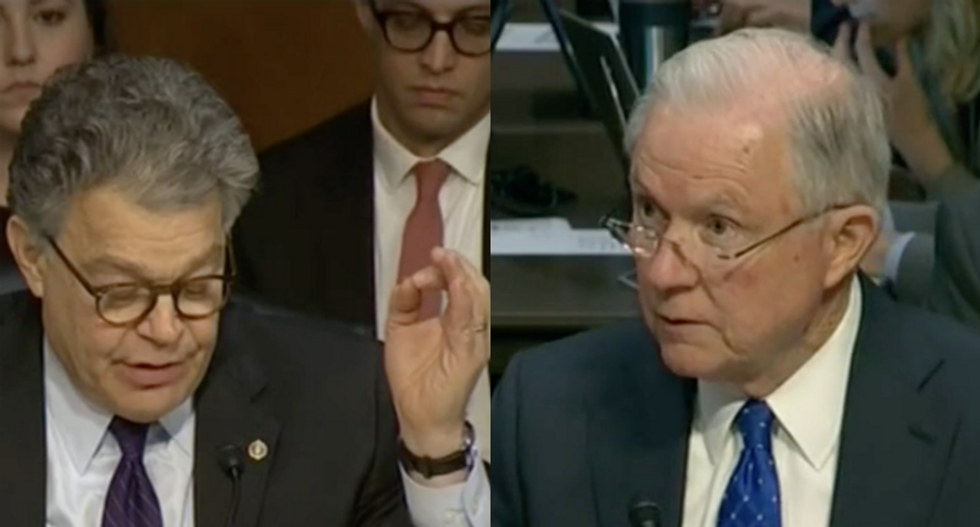 In the second part of Attorney General Jeff Sessions' hearing before the Senate Judiciary Committee, Sen. Al Franken (D-MN) took the opportunity to once again drive home that the AG is either lying or ignorant about the Trump campaign's associations with Russian operatives.

"I did not and I am not aware of anyone else that did," Sessions replied. "And I don't believe it happened."

Franken, as per usual, had a list of facts planned for his rebuttal.

"Do you believe that Michael Flynn was a surrogate for the campaign?" the senator asked his former colleague.

"He could probably have been defined as that," Sessions responded.

"Do you believe that Paul Manafort was a surrogate for the campaign?" Franken asked.

"Well, for a short time he was the chairman of the campaign," the attorney general responded.

"Do you believe that Jared Kushner was a surrogate for the campaign?" he asked.

Sessions appeared flustered when he responded, ultimately saying "there's no clear definition, but I assume a surrogate is someone speaking on behalf--."

But Franken cut him off, asking if the attorney general believed Donald Trump, Jr. was a surrogate for his father's campaign.

"Well, he was his son, and he spoke," Sessions responded.

Watch the entire exchange below, via CSPAN.