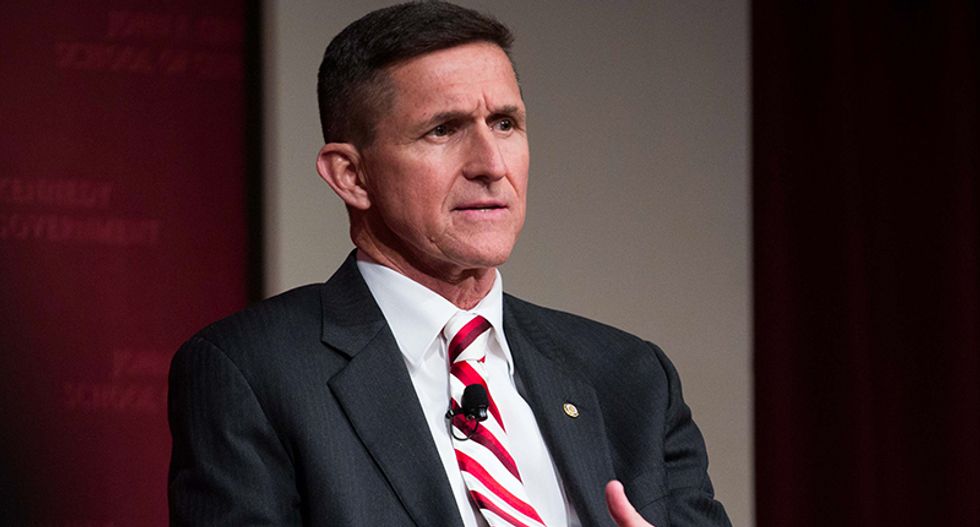 A panel of grey heads and black suits are pulling President Donald Trump's strings when it comes to foreign policy.

According to a Daily Beast report, in Jan. 2017, conservative Deroy Murdock laughed that Trump's cabinet makes former President Ronald Reagan look outright Communist. It's the London Center for Policy Research, a foreign policy think tank in New York that was founded by Herbert London in the 1990's and operates out of an evangelical college.

“You know you are doing something right,” Murdock said, “when the most liberal member of your cabinet is the CEO of Exxon Mobil.”

Until recently, few had ever even heard of it.

“I don’t know the top leadership at all personally,” another Bush national security team member, Peter Feaver, said. “I know some of the fellows, but I just don’t know this think tank well enough to comment, I think.”

“Until receiving your email, I’d never heard of the place,” said a veteran of the Bush and Reagan White Houses. “Never seen a thing they produced.”

The panel is filled with the likes of economist David Goldman, who advocated for Scott Pruitt to head the Environmental Protection Agency and wants to see the end of the Consumer Finance Protection Bureau. New York University Professor Lawrence Mead joined the Trump train because the president broke "the taboo around certain subjects, among them that blacks, Hispanics and Native Americans." He insisted that there are very real “ethnic differences, racial differences, cultural differences that are frankly too big to ignore," The Beast reported.

Avoiding any mention of the Trump White House, the 32 "senior fellows" have been at one time or another served as a Trump advisor. The most prominent of which is Lt. Gen. Michael Flynn, who's under investigation by both Congress and special counsel Robert Muller. Another is Monica Crowley, who was being considered for a national security post until she was caught in a plagiarism scandal. James Woolsey, a former CIA chief, served in the Trump transition. Allen West, an infamous conspiracy theorist and former Florida congressman, fits in well with Clare Lopez, an anti-Muslim conspiracy theorist who once worked at the CIA.

“All of these people are very much interested in a tabula rasa creation of policy, and an examination of what Obama did or didn’t do over the last eight years,” Herbert London told The Daily Beast.

“I think there would probably be a consensus that a weakness that has been displayed to the world, a feeling of aimlessness on the part of the Obama administration, and that there is a need for a world in which the United States provides the leadership without the deployment of a hundred or two hundred thousand troops on the ground," he continued. "But if you were to ask what brings all of these folks you mentioned together, it is a desire to think through policies different from what we have experienced over the last eight years.”

The vague obscurity is remarkably similar to the specifics that came from the Trump campaign or even the Trump White House today. The group is calling for strong borders and national sovereignty, as an example.

“Most think tanks are big on providing opinions about various issues. Our focus is different: This is a great policy but how do you make it work? How does it fit into other things you are trying to do. It’s more about practitioners, more about the practical application of policy,” sad communications director Tony Shaffer

“Obama went to Berlin and said I am a citizen of the world. Trump made clear he doesn’t get his passport from the world,” London said. “For a considerable period we have been on the defensive in what I would describe as the extraordinary developments of western civilization, and here I think about the rule of the law, the protection of individual rights, the free market, personal conscience. We have been on the defensive from the left, that argues that western civilization has promoted slavery, bigotry, imperialism, exploitation."

They're somewhere between "neoconservative interventionist tendencies of the Bush administration and non-interventionist backlash to that led by Rand Paul," The Beast cited London.

“I am not an isolationist, nor am I an internationalist," London continued. "My feeling is that the United States has gone through a very difficult period as a result of the Iraq and Afghanistan wars, and we have to think of something between unilateral investment of American blood and treasure in certain parts of the world, and at the same time the avoidance of what is happening on the international front."

He went on to say "the notion that our choices are isolation or war strikes me as not understanding the alternatives. There is a possibility of creating defense arrangements where nations with similar points of view come together and provide the military assets that are necessary for stabilization.”

When looking for their power and influence, look no further than Trump's speech in Riyadh, when he told Middle Eastern leaders to combat “a crisis of Islamic extremism” and thanked them for fighting the rise of Iran. The talking points came direclty from a white paper developed by the think tank called a “Gulf and Red Sea Treaty Organization" that London sent to former (and brief) communications director Sean Spicer.

“If you read the speech and you read our statements, they are almost exactly the same,” London said. “So I feel very confident in saying we played a role.”

London, however, is described as a Trump skeptic who supported Sen. Ted Cruz (R-TX) for president.

“I think Trump was lacking an intellectual curiosity and it disturbed me,” he said of the president, prior to Trump's inauguration. “When it became Hillary Clinton versus Trump to me it became Falstaff against Lady Macbeth. And while I am not a great admirer of Falstaff as a fool, I admire Falstaff more than Lady Macbeth. He’s a wild card, and wild cards are scary. This is scary. But Hillary Clinton was treasonous.”