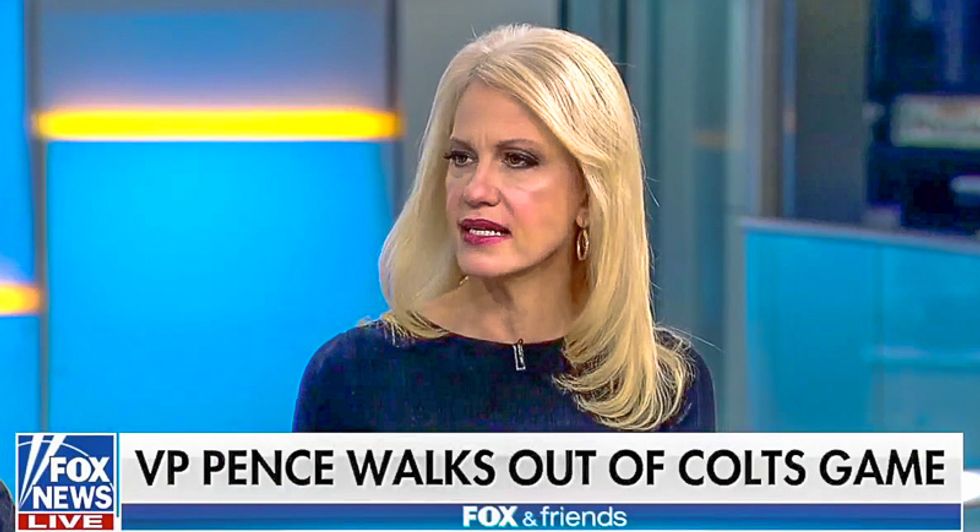 White House counselor to the president Kellyanne Conway on Monday insisted that Vice President Mike Pence's pre-planned decision to walk out of an NFL game was not a "political stunt."

On Sunday, President Donald Trump admitted that he told Pence to walk out of the Indianapolis Colts game if players kneeled during the national anthem. NBC News reported that Pence's traveling press pool was ordered not to enter the game because he was expected to depart early.

But Conway insisted to Fox News on Monday that it was "outrageous, egregious, and offensive" to label Pence's actions a "political stunt."

"Well, Peyton Manning was being honored before the game," Conway said in defense of Pence. "He was there for the pre-game."

According to the presidential aide, "it takes a lot to get that man's blood boiling."

"To call that a political stunt is truly outrageous, egregious and offensive," Conway said.

But even the hosts of Fox & Friends appeared skeptical about Conway's explanation.

"When did the vice president and the president talk about doing this?" Fox News host Steve Doocy wondered.

"So, they worked this out last week?" Doocy pressed.

"Hold on," Conway interrupted. "They talk every day. And they certainly have talked about this issue."