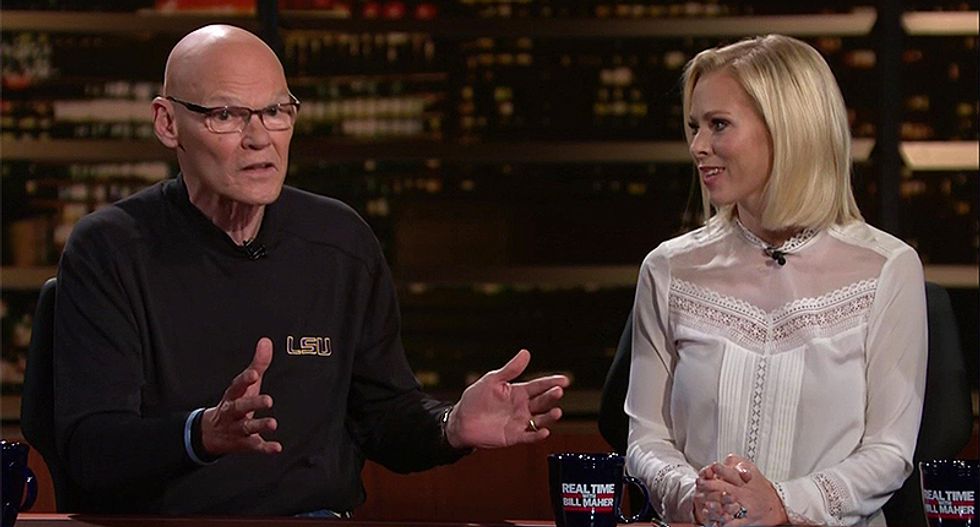 During a hilarious appearance on "Real Time with Bill Maher," former advisor to President Bill Clinton, James Carville was quick on quips and knocks against President Donald Trump.

As the panel discussion continued around Gen. John Kelly, Carville explained that the likely scenario is that the chief of staff told Trump what to say. However, because Trump can't manage to hold more than two thoughts in his head at once, he bungled it.

"The truth of the matter is that somebody has to look," Carville said turning to talk about former President Ronald Reagan and staff looking to see if he had cognitive issues. "I don't think Trump is capable of making those two thoughts. So I think he said, 'that's what he signed up for.' And Gen. Kelly wanted to hear that and that's not the way the widow heard it."

"Trump has no empathy and his sentence structure is completely gone," Carville continued.

When they turned to what might be behind the attack in Niger that killed four soldiers, Maher said that while this is far worse than Benghazi, there are similarities. He said that Democrats should pounce on it, because that's what Republicans would do.

Carville said that Democrats could never manage to do what the GOP has done and then quickly pivoted to talking about what happened in Niger.

"Does anyone really think Trump could find Niger on a map?" he asked. "He didn't know we were fighting a war or even had people there."

He went on to explain that someone giving speeches like Gen. Michael Flynn could never happen in the Democratic Party because Democrats wouldn't accept it. "They wouldn't go for it," he said.

Maher argued "as long as Democrats keep bringing a knife to a gunfight, they will lose."

Republican Margaret Hoover cautioned against going full Benghazi because it "didn't work for Republicans." Maher argued that it did and cited examples of speeches from the Republican convention in 2016 when it was all people were talking about.