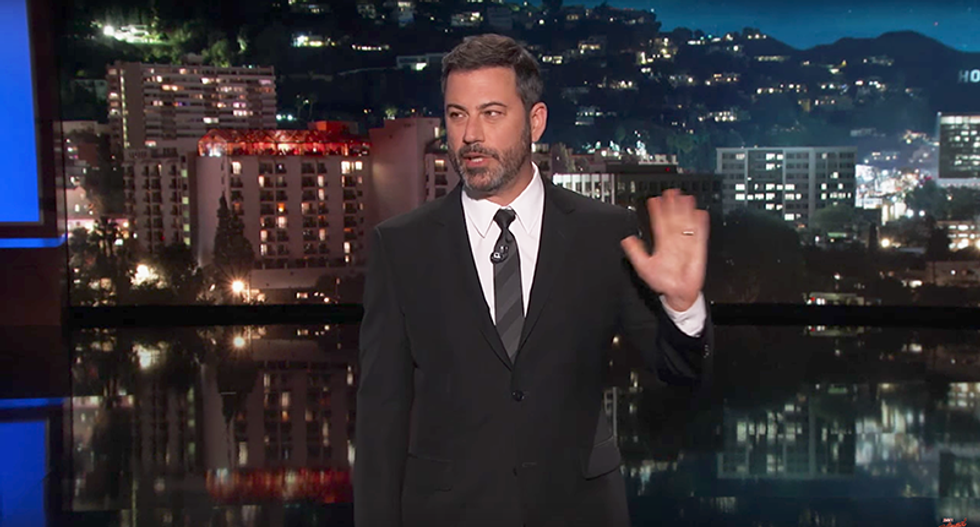 Jimmy Kimmel feuded with President Donald Trump and his son over the weekend about whether his political jokes were funny, and the president then demanded “equal time” to defend himself, and the late-night host kept at it Monday night.

It's "an interesting question," Kimmel said on Monday. "Especially since the president tweeted this demand for equal time after watching Fox & Friends breathlessly drool about how great he is for three hours straight."

He then mocked the president for talking about how repetitive people can be and played footage of Trump saying the same phrases over and over again.

On Twitter, Kimmel responded to Trump's, saying, “Excellent point Mr. President! You should quit that boring job – I’ll let you have my show ALL to yourself #MAGA.”

That got a quick response from Donald Trump Jr., who attacked Kimmel, attacked Kimmel about the "disgusting" allegations against Harvey Weinstein. Kimmel responded with the infamous "Access Hollywood" video in which Trump brags about assaulting women by grabbing them by the genitals.

Noting that Weinstein is “not the president” and “not particularly well-known outside of L.A. and New York,” Kimmel explained that Trump's “insinuation was that we, as part of the biased left-wing propaganda machine, wouldn’t say anything about him because he’s a Democrat — never mind the thousands of jokes about Bill Cosby and Bill Clinton” that he has told over the years.

“People are pointing to the fact that Harvey Weinstein was a Clinton supporter, and listen, it’s true, I’m not defending Hillary Clinton,” Kimmel said. “Fact is, her campaign did take money from a high-profile man who has been accused of sexual harassment multiple times.”

However, he noted that Clinton has a history of taking money from an alleged rapist and notorious sexual harasser: Donald Trump. Trump had given money to her U.S. Senate race.

“Next time you’re defending your father and you think it’s a good idea to draw a comparison between him and a freshly accused sexual predator, don’t. It doesn’t help," Kimmel told Trump Jr.

He then promised his audience a joke about Weinstein: