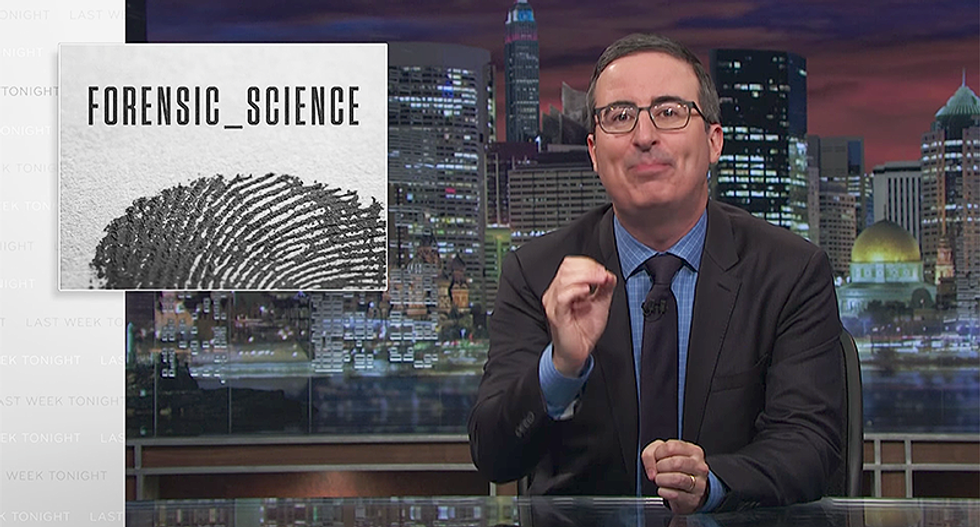 "On TV and in real life, forensic science plays an important role in criminal convictions," Oliver explained Sunday. Not all forensic science is as trustworthy as many think that it is. According to prosecutors, jurors in murder trials suffer from a "CSI effect," and they never think about the results leaning one way or the other. Oliver cited the findings from a 2009 National Academy of Science report that explained many forensic scientists "do not meet the fundamental requirements of science."

A more recent report from the Presidential Science Council in 2016 revealed "expert witnesses have often overstated the probative value of their evidence, going far beyond what the relevant science can justify."

"It's not that all forensic science is bad, because it's not," Oliver said. However, the many documented problems with things like bite-marks or hair analysis are "by no means infallible." Lawyers often use the phrase "from a reasonable degree of scientific certainty" when asking the experts to testify. Oliver argued that the phrase has a "scientific ring to it," but according to the 2016 study, "that phrase has no generally accepted meaning in science."

"When bad science is confidently presented, terrible convictions are possible," Oliver said. "Among the hundreds of people who have been exonerated by DNA testing since 1989, at least half (49 percent) were involved in misapplication of forensic science."

Judges in many cases, allow such evidence into trials due to procedures but not factual science. "Decisions about the validity of science are being made by people who don't necessarily know much about it," Oliver explained.

Santae Tribble spent 26 years in prison after an FBI expert said the evidence of his hair at the crime scene was rock solid. It was not. The reality was that none of the hairs found came from the same source.

To make matters worse, many labs have relationships with law and that can allow bias into the findings. "They are supposed to be neutral," not part of the "team" fighting for officers, Oliver went on. "If a referee started participating in a team's end-zone celebration, you'd have some serious f*cking questions."

Texas is one state Oliver says is leading the way on "junk" science used as evidence. The problem is so prevalent that the National Commission on Forensic Science was begun to help advise the Justice Department on how to avoid inaccurate science. However, Attorney General Jeff Sessions shut the department down in April.

"We may honestly be actively going backwards on this issue," and more innocent people will likely be locked up while dangerous killers are free. Oliver said that if the Trump administration has no intention of helping, he had his own version of CSI to explain to people.