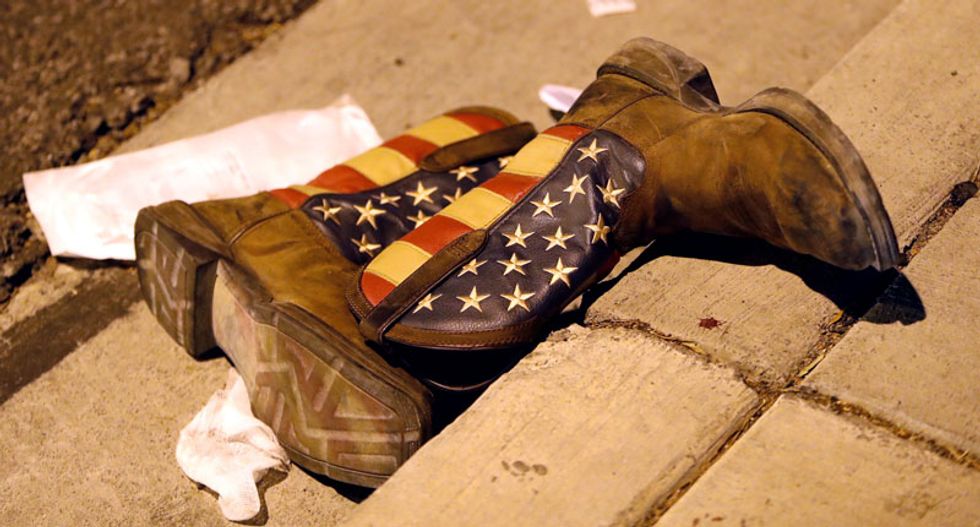 A pair of cowboy boots is shown in the street outside the concert venue after a mass shooting at a music festival on the Las Vegas Strip in Las Vegas, Nevada, U.S. October 1, 2017. REUTERS/Las Vegas Sun/Steve Marcus

Police sought clues on Tuesday to explain why a retiree who enjoyed gambling but had no criminal record set up a vantage point in a high-rise Las Vegas hotel and poured gunfire onto a concert below, slaying dozens of people before killing himself.

The Sunday night shooting spree from a 32nd-floor window of the Mandalay Bay hotel, on the Las Vegas Strip, killed at least 59 people before the gunman turned a weapon on himself. More than 500 people were injured, some trampled, in the deadliest mass shooting in modern U.S. history.

The gunman, identified as Stephen Paddock, 64, left no immediate hint of his motive for the arsenal of high-powered weaponry he amassed, including 42 guns, or the carnage he inflicted on a crowd of 22,000 attending an outdoor country music festival.

Paddock was not known to have served in the military, to have suffered from a history of mental illness or to have registered any inkling of social disaffection, political discontent or radical views on social media.

"He was a sick man, a demented man," U.S. President Donald Trump told reporters. "Lot of problems, I guess, and we're looking into him very, very seriously, but we're dealing with a very, very sick individual"

He declined to answer a question about whether he considered the attack an act of domestic terrorism.

"We have no idea what his belief system was," Clark County Sheriff Joseph Lombardo told reporters on Monday. "I can't get into the mind of a psychopath."

Although police said they had no other suspects, Lombardo said investigators wanted to talk with Paddock's girlfriend and live-in companion, Marilou Danley, who he said was traveling abroad, possibly in Tokyo.

Lombardo also said detectives were "aware of other individuals" who were involved in the sale of weapons Paddock acquired.

The closest Paddock appeared to have ever come to a brush with the law was for a traffic infraction, authorities said.

As with previous mass shootings that have rocked the United States, the massacre in Las Vegas stirred the ongoing debate about gun ownership, which is protected by the Second Amendment to the Constitution, and about how much that right should be subject to controls.

"We'll be talking about gun laws as time goes by," Trump said.

The death toll, which officials said could rise, surpassed last year's record massacre of 49 people at a gay nightclub in Orlando, Florida, by a gunman who pledged allegiance to Islamic State.

Paddock seemed atypical of the overtly troubled, angry young men who experts said have come to embody the profile of most mass shooters.

Public records on Paddock point to an itinerant existence across the U.S. West and Southeast, including stints as an apartment manager and aerospace industry worker. But Paddock appeared to be settling in to a quiet life when he bought a home in a Nevada retirement community a few years ago, about an hour's drive from Las Vegas and the casinos he enjoyed.

His brother, Eric, described Stephen Paddock as financially well-off and an enthusiast of video poker games and cruises.

"We're bewildered, and our condolences go out to the victims," Eric Paddock said in a telephone interview from Orlando, Florida. "We have no idea in the world."

Las Vegas's casinos, nightclubs and shopping draw more than 40 million visitors from around the world each year. The Strip was packed with visitors when the shooting started shortly after 10 p.m. local time on Sunday during the Route 91 Harvest music festival.

The gunfire erupted as country music star Jason Aldean was performing. He ran off stage as the shooting progressed.

Video of the attack showed throngs of people screaming in horror and cowering on the open ground as extended bursts of gunfire strafed the crowd from above, from a distance police estimated at more than 500 yards (460 meters).

The bloodshed ended after police swarming the hotel closed in on the gunman, who shot and wounded a hotel security officer through the door of his two-room suite and then killed himself before police entered, authorities said.

Lombardo said a search of the suspect's car turned up a supply of ammonium nitrate, a fertilizer compound that can be formed into explosives and was used in the 1995 Oklahoma City bombing of a federal office building that killed 168 people.

Police found another 19 firearms, some explosives and thousands of rounds of ammunition at Paddock's home in Mesquite, about 90 miles (145 km) northeast of Las Vegas.

They also obtained a warrant to search a second house connected to Paddock in Reno, Nevada.

Chris Sullivan, the owner of the Guns & Guitars shop in Mesquite, issued a statement confirming that Paddock was a customer who cleared "all necessary background checks and procedures," and said his business was cooperating with investigators.

"He never gave any indication or reason to believe he was unstable or unfit at any time," Sullivan said. He did not say how many or the kinds of weapons Paddock purchased there.

Lombardo said investigators knew that a gun dealer had come forward to say that he had sold weapons to the suspect, but it was not clear if he was referring to Sullivan. He said police were aware of "some other individuals who were engaged in those transactions," including at least one in Arizona.