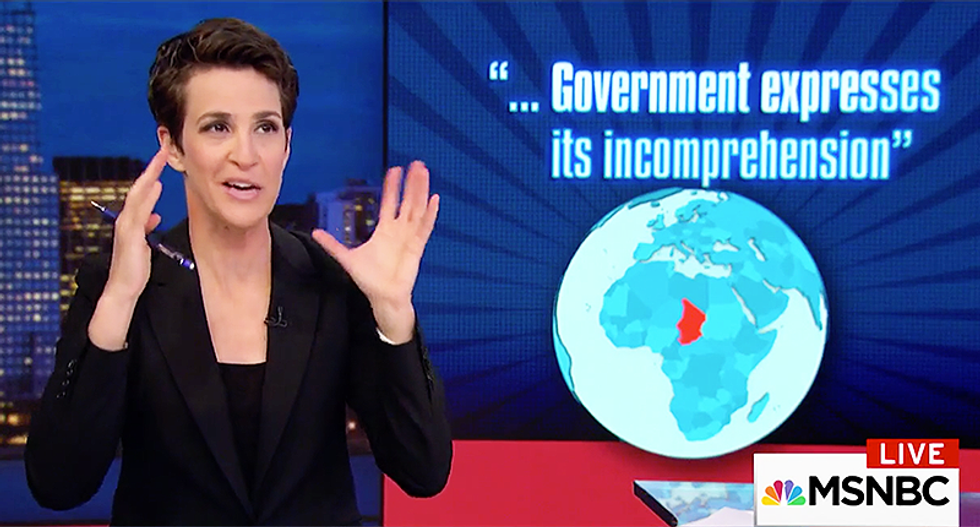 When President Donald Trump's White House instituted the travel ban and randomly added the African country of Chad to the list, MSNBC's Rachel Maddow says it may have destabilized the region. That lack of allied troops could have then been the cause of the deaths of the four soldiers killed two weeks ago in Niger.

Maddow began by walking through the extensive history of the groups of African and French fighters who have managed to battle Islamic extremists like ISIS and Boko Haram in central Africa and actually win. Most of these groups are headquartered in Chad, because the best of the best soldiers managed to run out the majority of the terrorist groups.

Yet, somehow, Chad ended up on Trump's travel ban list. When it did, there was an uproar of foreign policy experts who warned this was a terrible decision because it would destabilize the region and isolate American troops fighting there. Both the State and Defense Departments were also opposed to Trump's decision to put Chad on the list, because they knew it would cause military problems in the area. But the Trump administration demanded it.

"Several terrorist groups are active in Chad," Maddow cited the administration's reasoning. "If that's the reason you end up on the travel ban list, why wouldn't you put Mali or Niger or even Iraq and Afghanistan?"

A former State Department official who worked on that region went even further, telling the New York Times that putting Chad on that list could truly put Americans in harm's way.

Chad then began to withdraw their troops from the fight against Boko Haram in Niger. In fact, Chad's troops were gone a week after Trump added Chad to the ban list. According to Reuters, once the soldiers left, Boko Haram moved back in and people began to flee for their lives again. Shortly after the "battle-hardened" Chad fighters left, four American soldiers were attacked and killed in an ambush by ISIS extremists in Niger. Chad announced it began pulling its troops out two weeks ago on Oct. 13, which Maddow said would put their timeline for withdrawal at the end of September.

"Which would be the Friday after the Trump administration made this decision to insult and harm our closest military ally in that region, against ISIS and Boko Haram where ISIS has been trying to establish another caliphate," Maddow said. "But those Chadian troops were really doing something in Niger. They were protecting those villages in that whole region from ISIS militant groups being able to operate freely and be able to take more territory from there once again. And pulling those troops out had an immediate effect in emboldening those ISIS attacks."

Within days of the Chadian soldiers beginning to pull out from protecting those villages from ISIS, four soldiers were ambushed.

"So, no wonder the president doesn't want to talk about it," she said. "The AFRICOM spokesperson from the U.S. military has said the death of the four American soldiers 'was not expected.' And troops had done more than two dozen patrols in the last six months with no problem. But this one was different. Certainly in it's result. Potentially in it's cause."

The Pentagon prepared a statement for Trump on the incident, but Trump has not made that statement as of yet.

Watch the clips in two parts below: