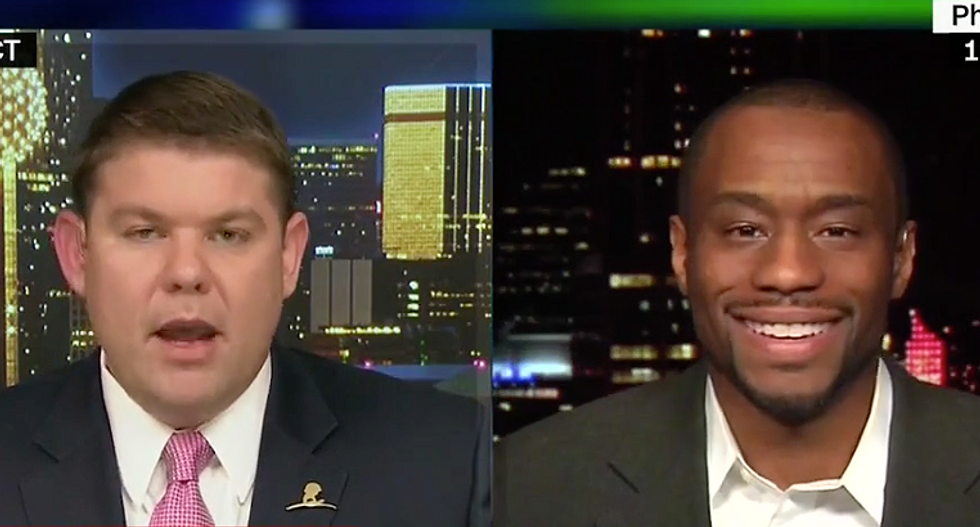 Hill and Ferguson were discussing the president’s response to Hillary Clinton’s statement in support of NFL players taking a knee during the national anthem. Trump had used the opportunity to gloat about beating Clinton in the 2016 presidential election and mockingly suggested the former Democratic candidate should run again.

“To the actual substance of the question which is: Is it disrespectful? I think Hillary Clinton is right,” Hill continued. “It is not disrespectful. The players certainly aren't intending to disrespect the American flag by taking a knee.” Hill later added it’s “not okay” for Trump to position himself as “the arbiter of what's right and wrong.”

“I hope she's the author of another book that is entitled, ’It happened again,’” Ferguson said. “I mean, for the first time in my life I stand with her, I want Hillary Clinton to run for re-election. That would be amazing.”

“She's not a private citizen,” Ferguson insisted. “She's a public figure. Very much so. She's out there publicly criticizing the president.”

“To say that somehow he's picking on her is absurd,” he added.

Hill called Ferguson out for making “a dishonest argument” by suggesting he was trying to say Trump “was picking on her.”

“I’m kind of over this NFL protest thing,” Ferguson said, agreeing with Walker’s letter. “I think they're in serious trouble with their fan base now.”

“Let's move on to something positive that we can all agree on, which domestic violence is a month that we should be able to highlight,” Ferguson later added, drawing a laugh from Hill.

“It must be an extraordinary feeling to be able to just say, ‘Hey, let's move on past this whole racial injustice thing,’” Hill replied.

Ferguson shot back that the NFL is “just getting annoying” because he wants to watch football without talking about racial injecting in the United States.

“I think they're ruining the game,” Ferguson explained, later repeating he’s “over the NFL.”

“I'm not so much over the NFL,” Hill shot back. “I’m more over black people being shot in the street by police. I’m more worried about unarmed people dying. I'm more worried about mentally ill and people under the age of 18 being killed by law enforcement. That I’m actually really, really over.”

“So if people taking a knee can stop any of that, I am so much on board with that I don't mind missing an NFL football game,” he added.