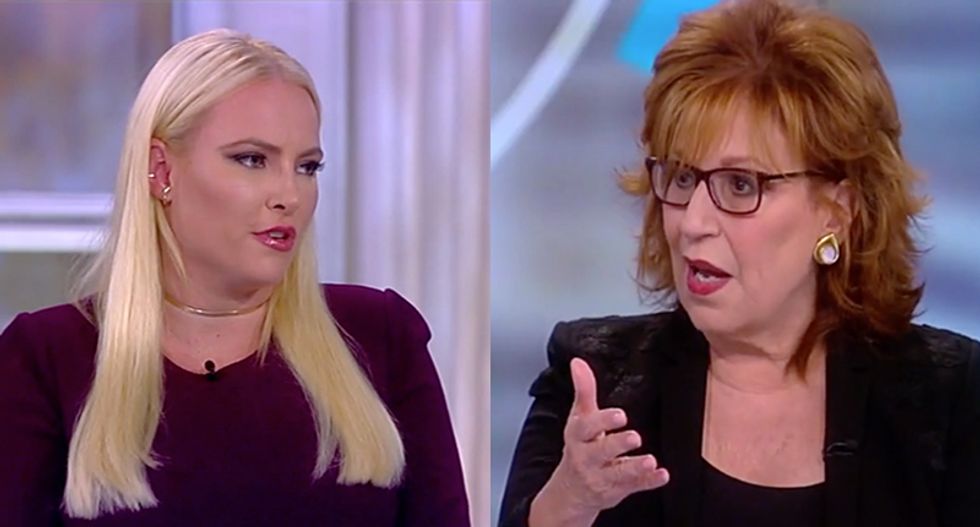 Monday was the first day on "The View" for Meghan McCain, daughter of the senior Arizona Senator John McCain. She promised that she would probably never agree on anything with liberal co-host Joy Behar. The first argument proved that Behar wasn't about to go easy on her.

The panel brought up Vice President Mike Pence's $250,000 staged walk-out at the Colt's game on Sunday. McCain began by saying that when she was in college she had an American flag on her wall because her younger brother was serving in Iraq. She said that she took it personally.

"The American flag and the National Anthem mean more to me than just symbolism," she said. "I'm deeply patriotic, and to me when I thought he could possibly get blown up in a Humvee in Iraq, it gave me solace, so, I think, there's a misunderstanding that I think we can have a conversation about both things while still respecting what the National Anthem and the American flag mean to people like me."

Behar cut in to explain that those soldiers who fight and die for the United States do it for more than just the flag and a song.

"There's another point of view on that, though, which I brought up last week," Behar cut in. "People who die for the flag in these wars are also dying and defending the flag so that people like [Colin] Kaepernick and the rest of them can protest."

McCain shot back that she didn't mean that the players "didn't have a right to." She said that if she was at a game where players were kneeling she would have walked out as Pence did.

Co-host Sunny Hostin brought up her son who played in a football game and decided to be one of few on his team who also knelt during the playing of the National Anthem. She said it filled her with pride. She went on to say that those attempting to suppress the Constitutional rights of others is incredibly un-American.

"That's the thing," Hostin said. It's not disrespectful to the flag. It's their constitutional right. I think it's very patriotic."

Allies are standing in support of Meghan, the Duchess of Sussex, after the recent revelations that Prince William's godmother, Lady Susan Hussey had a racist exchange with Ngozi Fulani, of the community initiative Sistah Space.

The high-ranking Buckingham Palace pal has resigned since the incident became public, but the exchange is just another in a line of racist incidents coming from the British Royal Family.

Stanley Woodward is a veteran attorney who has recently taken on clients ranging from Jan. 6 rioters to ex-Trump aides, making him "the most prolific Trump-world warrior you’ve never heard of," according to a new report from Politico.

"Those who know Woodward say Trumpian figures are drawn to him precisely because he’s what many lawyers who end up in Trump circles are not," Politico's report states. "He’s neither a bomb-thrower nor a headline-seeker. He’s a law nerd in a world of political operatives. And it’s the separation he has from the Trump loyalty-at-any-cost mentality that’s made him in demand among MAGA figures embroiled in the legal morass that followed Trump since Jan. 6."

To hear some tell it, a Supreme Court case set for argument on Dec. 7 could spell the end of democracy in the United States. If the Republicans who brought the case, Moore v. Harper, prevail, state legislatures will effectively be free to override the votes of their citizens in presidential elections, the doomsayers predict. That might allow a future presidential candidate to undo an election, much as Donald Trump attempted, but failed, to do in 2020.

The Atlantic warned that the “Court’s right-wing supermajority is poised to let state lawmakers overturn voters’ choice in presidential elections.” The Guardian opined that a ruling in favor of the GOP would mean that “whether Republicans win or lose elections via the popular vote will not matter because they will be able to maintain power regardless.” And Slate called Moore v. Harper “the Supreme Court case that could upend democracy.”